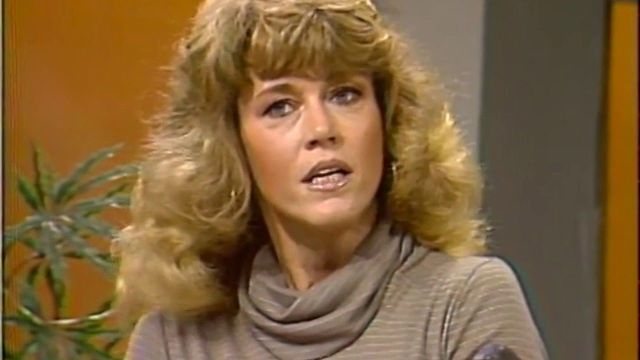 Source:Eileen Prose– Hollywood Goddess Jane Fonda: I believe on The Good Day Show in Boston in 1979.

“She stars with Lily Tomlin, Sam Waterston and Martin Sheen in the Netflix original series Grace and Frankie, which premiered in 2015. Jane is an actress, writer, political activist, former fashion model and fitness guru.”

I see two Jane Fonda’s when look at her life and her personal career and I see one Tom Hayden.

The first Jane Fonda, is not just a great actress, but perhaps the best of her generation, with maybe only Elizabeth Taylor being better. As well as this gorgeous and adorable woman who is a pleasure on the both the eyes and ears.

The second Jane Fonda, is a radical Hollywood Leftist, who sees America as the real war criminal and evil empire ( at least when she was younger ) who is looking to bring down what she sees as an evil regime in America ( in other words: the U.S. Government ) and replace it with some type of socialist state. I know this sounds crazy, but if you just look at her days when she protested against the Vietnam War, she was perhaps even to the left of Senator George McGovern with her rhetoric and labeling American soldiers as war criminals and getting her photo taken with Communist Vietnamese soldiers, when American soldiers were fighting these same Communist soldiers in Vietnam. Who also frequently attacks establishment Democratic politicians, because they’re too mainstream.

As far as Tom Hayden: he was a Socialist activist in the 1960s and 70s before that word became popular even with young Americans today. Who was never an actor or entertainer ( at least not professionally ) who became a California politician, who was also one of the founding members of the 1960s and 70s New-Left in America. ( Of Socialists and Communists ) In one sense at least I have more respect for Tom Hayden, because he was more pure. He didn’t take advantage of the American system except for personal freedoms like freedom of speech, to bash the American system. Unlike Jane Fonda, who became very successful and wealthy in the same American system that she believed needed to be changed and perhaps even overthrown.