Posted on September 10, 2014 by Ederik Schneider

Here’s and example of why the Bears-Packers rivalry is so great. The Packers didn’t even make the NFC Playoffs in 1984. I think they finished 8-8 under their first-year head coach Forrest Gregg. The Bears were 10-6 and got to the NFC Final where they lost to the San Francisco 49ers, who were the eventual Super Bowl champion that year. And yet the Packers come into Chicago and not only beat the Bears, but beat them in dramatic fashion at the end of the game. Costing the Bears 2nd place in the NFC and forcing them to win at least one playoff game on the road to get to the conference final.

The Packers not only beat the Bears in Chicago, a game the Bears needed to win, but they beat them without their starting quarterback Lynn Dickey. Who was a Pro Bowl caliber quarterback for the Packers in the 1970s and 80s. And beat them with a third-string quarterback. Now of course the Bears didn’t have Jim McMahon or even Steve Fuller as their quarterback for this game. But they still had their 46 Defense and were healthy there. Playing a Packers team that didn’t have any great players on offense, other than maybe wide receiver James Lofton. 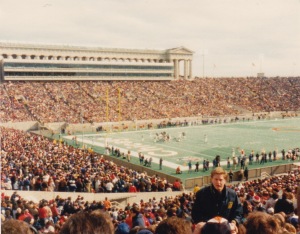