Posted on September 3, 2014 by Rik Schneider 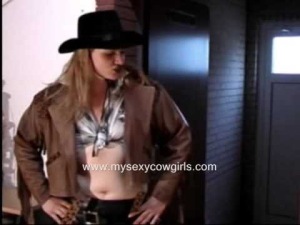 “Great video clip of 2 cowgirls , in the end both get shot in the belly and heart.”

From My Sexy Cowgirls

There’s a YouTube channel called My Sexy Cowgirls and they have a web site with I believe the same name as well. And they make videos with actress’s playing cowgirls from like the Old West but make it more modern with outfits more like in the 20th and 21st centuries as far as outfits. No more really long dress’ because they’ve been replaced with tight denim and leather jeans with cowgirl boots with the cowgirls hats.

Sort of like the Sharon Stone movie The Quick and the Dead from 1995 with Gene Hackman. The YouTube channel seems to either be gone or they stopped uploading videos which is too bad from at least my point of view and I’m sure many other guys point of view as well. Because these beautiful sexy women playing cowgirls in these videos doing either shootouts or bar fights just like in the Old West, but instead of having butch strong men play the roles they use young attractive sexy women instead and these videos are very entertaining.