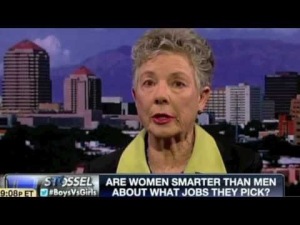 The gender pay gap is only a real issue as far a concern, if men are being paid more simply because they are men. That if employers pay their male employees more money simply, because they are male and not female. Because of course that would be real gender discrimination. But if men are paid more because they tend to work jobs that pay more than jobs that women tend to work, that of course that is not gender discrimination, but is called capitalism and the private market. If women were simply being paid less because they were women and employers decided to pay their male employees more than their female employees, then there would be a national scandal. And all sorts of civil rights lawsuits would be filed and it would be all over the news.

Men and women should be paid and generally are for the work that they do. If men and women are literally working the same jobs with the same experience and have been with the company the same period, but the man or women is doing a better job than the other and gets a bigger raise, or gets a raise while the other doesn’t, then how is that unfair. That is how private enterprise works. People get paid for the work that they do. It would be anti-business and a bad business practice to pay employees male, or female, just because of their gender. Especially if they are less productive and it would also send a bad message. Because you would be telling the mediocre employee that they can make more money by being mediocre. And telling the productive employee that doing a good or great job won’t make them more money.