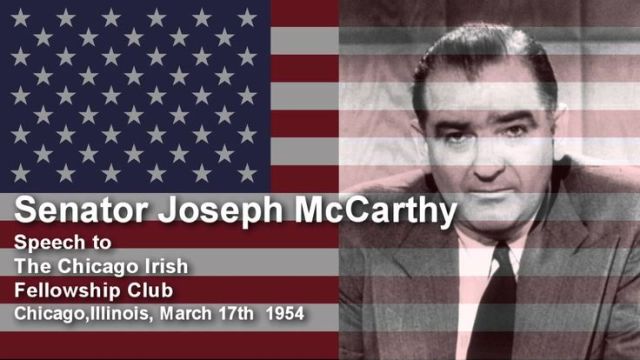 “Joseph Raymond “Joe” McCarthy (November 14, 1908 — May 2, 1957) was an American politician who served as a Republican U.S. Senator from the state of Wisconsin from 1947 until his death in 1957. Beginning in 1950, McCarthy became the most visible public face of a period in which Cold War tensions fueled fears of widespread Communist subversion.[1] He was noted for making claims that there were large numbers of Communists and Soviet spies and sympathizers inside the United States federal government and elsewhere. Ultimately, his tactics and inability to substantiate his claims led him to be censured by the United States Senate.

The term McCarthyism, coined in 1950 in reference to McCarthy’s practices, was soon applied to similar anti-communist activities. Today the term is used more generally in reference to demagogic, reckless, and unsubstantiated accusations, as well as public attacks on the character or patriotism of political opponents.[2]

Born and raised on a Wisconsin farm, McCarthy earned a law degree at Marquette University in 1935 and was elected as a circuit judge in 1939, the youngest in state history.[3] At age 33, McCarthy volunteered for the United States Marine Corps and served during World War II. He successfully ran for the United States Senate in 1946, defeating Robert M. La Follette, Jr. After three largely undistinguished years in the Senate, McCarthy rose suddenly to national fame in February 1950 when he asserted in a speech that he had a list of “members of the Communist Party and members of a spy ring” who were employed in the State Department.[4] McCarthy was never able to prove his sensational charge.

In succeeding years after his 1950 speech, McCarthy made additional accusations of Communist infiltration into the State Department, the administration of President Harry S. Truman, the Voice of America, and the United States Army. He also used various charges of communism, communist sympathies, disloyalty, or homosexuality to attack a number of politicians and other individuals inside and outside of government.[5]

Not as widely known as McCarthy’s anti-Communist crusade were his various attempts to intimidate, and expel from government positions, persons whom he accused, or threatened to publicly accuse, of homosexuality. Former U.S. Senator Alan K. Simpson has written: “The so-called ‘Red Scare’ has been the main focus of most historians of that period of time. A lesser-known element…and one that harmed far more people was the witch-hunt McCarthy and others conducted against homosexuals.”

By 1951, Senator McCarthy becomes Ranking Member of the Oversight Committee which is where he starts his so-called investigation of Communists in the U.S. Government, to two years later after Republicans win back Congress with Dwight Eisenhower becoming President where McCarthy becomes Chairman of that committee with subpoena power. Which was actually the start of his downfall because of how he used that power as Chairman and where guilt be association becomes better known as McCarthyism that of course was named as Senator Jospeh McCarthy.

As far as Senator McCarthy’s Traitors Are Not Gentlemen speech: you have to understand what the term traitor is: a traitor is someone who “betrays a friend, country, or organization.” Its a word that is wildly used today especially by hyper-partisans on the Far-Right in America and how they talk about people who simply disagree with them and don’t share their politics, cultural or religious values, even if the person or people that they’re labeling and even libeling have no foreign allegiances and love America for what America is which is the guaranteed right for Americans to be Americans not feel the need to have to fit into some religious or cultural box in order to be great Americans.

McCarthyism, wasn’t the start of tribalism and what we call nationalism today, but it was a huge moment in time for those movements and Joe McCarthy is someone that Nationalists and the broader Far-Right in America look up today and view as one of their heroes and argue that McCarthy was right in what he did, because in their view Communists and Socialists in general aren’t deserving of the same constitutional rights as people they would call the real Americans. Which are people that look at the world and America the way they do with this hardcore fundamentalist religious and cultural philosophy about what America is and what they believe it should be.

What McCarthyites and people who would be called Nationalists today fail to understand or aren’t willing to admit is what makes America great is the guaranteed right for Americans to be Americans and that we don’t all have to be the same: we don’t have to look the same, act the same, talk the same way, believe in the same religion, or even have to be religious at all, and we don’t have to think the same way to be great Americans. We just have to acknowledge the respect the rights and freedoms of other Americans as much as our own.