Reagan Foundation: Video: Ronald Reagan: A Time For a Choosing

The so-called Reagan Revolution of 1980, that brought Ronald Reagan to the presidency and thirty or so new House Republicans and the Senate Republicans winning control of the Senate for the first time since 1952, actually started in 1964 under Barry Goldwater. Ron Reagan just had the personality to sell American conservatism to the country and show Americans that it wasn’t scary. It took really sixteen years for the Republican Party to control both the White House and at least one chamber of Congress.

But all of these steps were put in place starting in 1964, when the message was put together. When Republicans started winning in the South consistently in 1966, a big reason Richard Nixon was elected President in 1968, won a landslide in 1972, because Southerners were becoming Republicans. The Democratic Party was losing its grasp on the South and hasn’t gotten it back since. Congressional Republicans lost overwhelmingly in Congress in 1974, but a lot of that had to do with Watergate.

Republicans lost again in at least partially due to Watergate 1976 and Ron Reagan ran for President in 1976. And came damn close to winning the Republican nomination from President Gerry Ford and kept this message of individual freedom and personal responsibility alive. The tax revolt of the late 1970s, especially in California, all of these things were part of the Goldwater/Reagan Revolution. Thanks to Barry Goldwater, the Republican Party was changing from a yes fiscally conservative socially moderate party.

The GOP was mostly in the Northeast and Midwest and became a party that was able to communicate this message across the country and take this message to the South. The only thing with the South, is they brought in the Religious Right to go along with Republicans who are more libertarian than statist when it comes to social issues. But the GOP understood that they were simply too small and had to grow their base to compete with Democrats in the future. 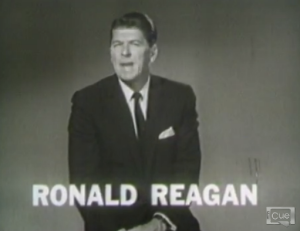