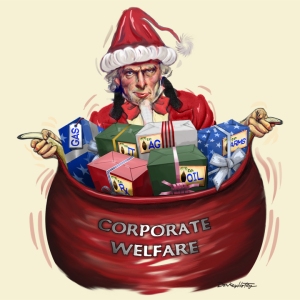 How about instead of justing giving big successful companies and corporations subsidies for being successful and wealthy, which is what corporate welfare is, we put that taxpayer money to good use. We convert corporate welfare into corporate workfare. That is taxpayers are going to subsidize American corporations at all, that money has to be spent in America and invested in the American economy. No more subsidizing American jobs oversees. That instead that money is invested in Americans and American workers.

Pension plans would be an example of that. Subsidize American pension plans so American companies are incentivized to give their employees pensions.

Subsidizing stock options so workers can own a real stake in the company that they work for.

Subsidize education and retraining, especially for low-skilled low-income workers. So they can move up in the company that they work for. And actually get themselves a good job.

Subsidize expansions and redevelopment of companies so they are encouraged to expand their companies when it financially makes sense for them to do so. Instead cutting jobs and sending them oversees.

Subsidize cost of living increases so we can see some real wage growth in America again. Instead of wages going flat or decreasing because companies are struggling.

Instead of corporate welfare, let’s have corporate workfare and business workfare in general. So money that taxpayers are paying out to American companies goes to good American economic use. And not used to develop other countries and send jobs oversees.