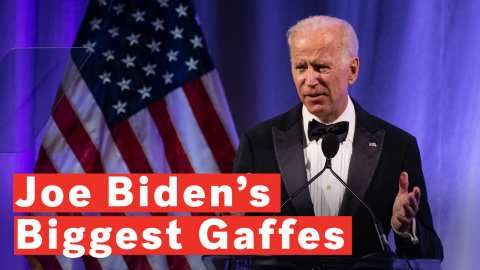 Laying out Joe Biden’s biggest gaffes, is like trying to layout Michael Jordan’s greatest dunks, or Joe Montana’s greatest games, Larry Bird’s best shots, Magic Johnson’s best passes, Martin L. King’s greatest speeches, and unfortunately I could go on and hopefully you have a good idea by now. ( If not, seek help )

What people love about Joe Biden, is also what gets him in trouble: what Americans say they want from politicians, is what gets Joe Biden in trouble. He has a tendency to speak from the heart and tell people what he thinks and what he knows and if that was actually what Americans wanted from their politicians, instead of an entire team of ass-kissers and panderers which is what they consistently vote for in both parties, Joe Biden would’ve already been President by now and Jimmy Carter would’ve been reelected in 1980. Two men who told the truth or at least were honest time and time again and at least in President Carter’s case wasn’t very successful as a politician.

To talk about one of Joe Biden’s so-called gaffes: it was during the signing of the Affordable Care Act back in 2010 which then Vice President Biden had a role in getting passed through Congress, especially getting it through the Senate after the House already passed the bill where you had some Democratic Senator’s who were wavering on the bill, but it finally got passed: Vice President Biden, gives his speech at the signing ceremony where President Obama signs the bill and introduces the President and when he believes so one is looking and I guess forgets that his microphone is still on, tells the President in private: “that this is a big fucking deal” referring to the ACA.

The Vice President got in trouble for doing what we all do in private and what a lot of us do in public on TV ( if you’re familiar with cable TV ) which is swear in a public setting. He gets in trouble ( if you want to call it that ) for doing what everyone else does, but perhaps struggles to admit which is to cuss in public.

My point about Americans saying they want politicians in polling to be honest and truthful, but then get on politicians for not telling them they can have all of their cookies, cake, and ice cream ( meaning government services ) and never have to eat their vegetables, ( meaning new taxes ) Biden gets in trouble at least in the media for doing what we all do, but generally in private unless we’re really pissed at a bar or in traffic, or at the airport or some place which is let out our anger or amazement through swearing.

I think a lot of Joe Biden’s gaffes are just very funny and great material for Saturday Night Live, but a lot of them are really just him getting caught being very blunt and saying exactly what he feels about the given moment and perhaps giving out too much information. And that he represents what Americans tend to say ( at least in polling ) as far as who they want in their politicians: which are honest, truthful people who’ll tell them exactly what they think and hear. Even if 2-4 years later they vote those people out for doing exactly what they said they wanted them to do which was to be completely honest and truthful.

Blogger on everything that interests me and that I'm knowledgeable about.
View all posts by Derik Schneider →
This entry was posted in Democratic Party and tagged 2020 Presidential Election, America, Center Left, Democratic Party, Joe Biden, Joe Biden For President, Progressives, Progressivism, United States. Bookmark the permalink.