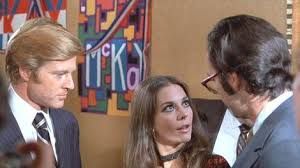 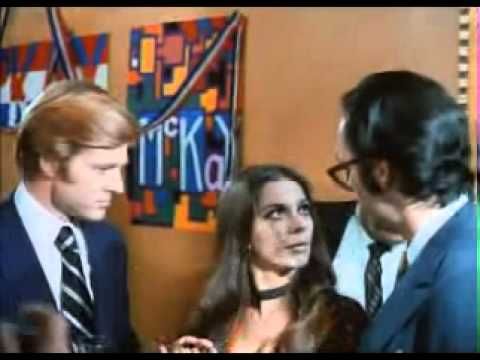 In this scene Natalie Wood plays herself and Bill McKay (played by Robert Redford) is obviously not just interested in Natalie, but is perhaps overwhelmed by her.

If you’re familiar with The Candidate, Redford doesn’t really play anyone that’s like him. He plays a progressive labor activist who is the son of a former California politician (played by Melvyn Douglas) but is someone who doesn’t want to be involved in electoral politics. I believe McKay in the movie says he hates politics or hates politicians. (Who can blame him)

Bill McKay  is recruited (if not begged )by Marvin Lucas (played by Peter Boyle) to run against the Republican Senator played by Don Porter. So McKay is not use to the limelight and being around celebrities and not used to being a celebrity himself.

What you also see in this scene is the nerd in the glasses, I mean Arthur Fleischer (played by Robert Goldsby) trying to get Natalie’s attention. But silly Natalie would rather to talk to Robert Redford, I mean Bill McKay than a foreign policy nerd who writes speeches for political campaigns. (Which should be a shocker to no one)

The Candidate is a great movie, one of my favorite political films ever and perhaps my favorite political satire. The only thing that could’ve made this film better is if Natalie had more than a cameo in the movie. I love Karen Carlson (who played Bill McKay’s wife) and I wouldn’t have replaced Karen with Natalie, but perhaps made Natalie one of the campaign strategist or spokespeople. Too great of an actress, too great looking, too funny, to just have a cameo in a great movie like this.