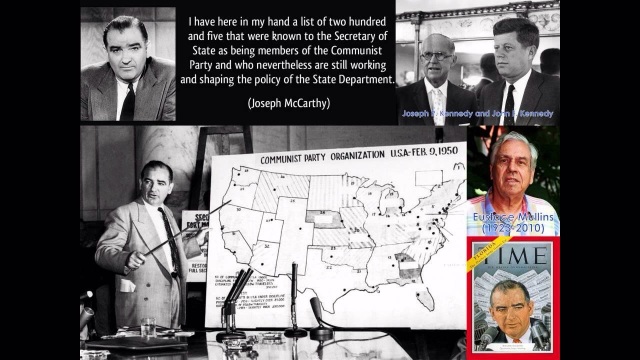 Here’s a radio interview I guess on the Joe Rense Show, or whatever that show is called with Eustace Mullins. Eustace Mullins was one of the top conspiracy theorists in America in the 20th Century. Part of the so-called New World Order crowd who saw the Federal Reserve as some dictatorship. Who was anti-semitic and believed the Jews were trying to run the world.

So to have a man like this believe that what Senator Joe McCarthy was doing with his McCarthy hearings in the Senate in 1953-54 was a good thing and that a lot of good came from that, is not surprising that someone of that background could believe all of that nonsense. (To be nice)

I mean to call Franklin Roosevelt a Communist when he and his administration helped create the U.S. National Security State that not only won World War II and defeated the German Nazis, but also gave America the strength it needed to fight and win the Cold War and defeat Russian communism, gives you an idea how far Eustace Mullins played out in right field. Probably somewhere around 1000 feet if not miles from home plate. He might even need binoculars, or a telescope to see home plate, or even centerfield from how Far-Right and conspiratorial he was.

But Joe McCarthy wasn’t by himself. He not only believed that Communists were going to takeover the U.S. Government, but had a lot of support on the Far-Right in America who believed the same thing in the 1950s.

I’m sure that Joe McCarthy wanted to find Communists in the U.S. Government both Truman and Eisenhower administration’s, but his ultimate goal was to run for president and run as the top anti-Communist Cold Warrior in America. And run for president in 1960 and use his investigating committee as his launching post in order to accomplish that.

That obviously crashed and burn with a Republican Senate along with support from Senate Democrats the minority party back then voting to censor Senator McCarthy in 1954. Because both caucus’ believed that McCarthy went too far and hurt a lot of innocent Americans who had nothing to do with communism other than perhaps knowing Communists, or meeting them at functions.