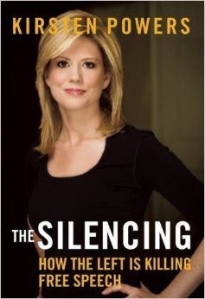 “Kirsten Powers’ new book,The Silencing: How the Left is Killing Free Speech provides a thorough account of the hypocrisy, intolerance, and just plain nastiness of what she terms the “illiberal left.” It is indeed refreshing to read a self-proclaimed “lifelong liberal” call out the abuses of her co-progressives, even if she breaks no new ground in doing so: informed conservatives are already well aware of what regularly goes on in academia, Hollywood, traditional media, and other environments dominated by the left.”

From the American Thinker

Again, with the so-called The Left. As if The Left, is united on everything and everyone on The Left sees the world exactly the same way.

The Left, similar to The Right, is very diverse. Both sides of the political spectrum, are made up of different political ideological factions. The Left, has Progressives from the Center-Left, to Social Democrats, Democratic Socialists, Communists, and Marxists on the Far-Left.

The Right, has Conservatives and Conservative Libertarians, and Neoconservatives on the Center-Right. To Christian-Nationalists and Nationalists, and other rightist-statists on the Far-Right. Had Kirsten Powers said: “The Silencing: How The Far-Left is Trying to Kill Free Speech”, I would’ve seen that as a perfect title.

The Far-Left (lets calls them Socialists, Communists, perhaps even) but probably still Democratic, see a world where women are in charge. Because the Radical Feminists have taken over. Forget about equal protection and men and women being equal under law, because women are simply in charge. Because in a Radical Feminist world, women are simply superior than men. “And anyone who goes against this view that women are superior and not equal, is a sexist pig. Who doesn’t even deserved to be heard, let alone debated.”

The Far-Left believes people are essentially stupid and need a big government to manage their economic and personal affairs for them. That Caucasians, are bigots generally, especially if they have an Anglo-Saxon Protestant Southern background. Unless they share the worldview of the Far-left.”

The Far-Left believes that any critique of, or less than positive comments even if they are true, towards anyone who isn’t Caucasian, is somehow racist. Even if your comments are correct and are about religion and now about race, or ethnicity. As Bill Maher found out last fall when gave some editorials about Islam.

I haven’t read the Kirsten Powers book, but if this is what she’s talking about, then she’s probably correct. But it’s not Liberals, but Far-Leftists, people who are illiberal. Who want to shut down the Rush Limbaugh’s of the world, the Ann Coulter’s, the Bill Maher’s even when he’s not with them.

And there’s nothing liberal about these practices since the first value of liberalism if Freedom of Speech, the First Amendment. The right for people to speak and associate freely.