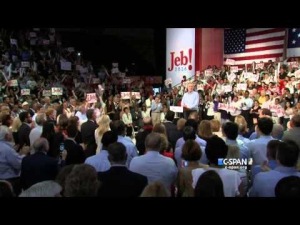 I doubt I’m the first one to have said this, but I’m still having a hard time seeing the differences between Jeb Bush and George W. Bush. Sure, Jeb is taller and has his father’s height. And he’s younger than George W. and has a Florida accent instead of a Texas accent. But once you get past the physical and characteristics, how are the two Bush brothers different at all. Its one thing to resemble a successful popular President, either physically, or when it comes to policy. That can probably help you and what you have to do is show people where you separate and become your own man, or women. But it’s another thing to resemble a President that isn’t very unpopular and not considered successful at all. And Jeb, is in the latter category.

The other thing that I picked up from this speech, which is something The Daily Beast covered yesterday, was Jeb talking about if we can get to four-percent economic growth, we can create nineteen-million jobs. Well, guess what Jeb, we did that four for four years in the 1990s as far as economic growth and under President Bill Clinton we created twenty-two-million jobs in the 1990s. So is Jeb going to talk like George W, but govern like Bill Clinton politically when it comes to economic policy? And the rest of this speech is really just for his audience and his followers. “Barack Obama, is taking American downhill and I’m the guy to get America moving again.” And everything he doesn’t like about President Obama.

I don’t know what Jeb accomplished in this speech. He already has the establishment business friendly wing of the Republican Party with him. Being a Bush and everything, he’ll probably get the national security Neoconservatives as well. Especially if he keeps talking like G.W. when it comes to foreign policy and national security. But talking like G.W., won’t win Jeb the Tea Party, or bring the Rand Paul Libertarians with him. And sure as hell won’t win him the general election, if he gets that far in the fall. America, is not looking for another George W. Bush to govern them. And for a Republican to win the next presidential election, they’re going to have to be able to speak and communicate with voters who want something different. Who’ll continue to keep America strong.