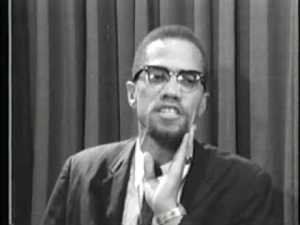 “Malik Shabazz aka Malcolm X (1964) – Interviewed in his home on June 8, 1964 by Mike Wallace of CBS News. Aired the following day on CBS Morning News.”

Malcolm X made perhaps the most honest and truthful statement he ever made in life in this interview late in the interview, when he said in response to Mike Wallace’s question: “Have any death threats been made against you?” With Malcolm saying: “Yes, I’m probably a dead man already.”

I believe Malcolm was already moving away from the Nation of Islam anyway and moving in the direction of separation of the races in America might not be necessary after being exposed to Caucasians and people of other races in Mecca.

But then to basically accuse the Leader of the Nation of Islam Elijah Muhammad of not just having bastard children, but having bastard children with multiple women, would be like an Iraqi in 1990 or something running to the streets of Baghdad and calling for the death of Saddam Hussein. There are certain things you don’t make public if you want to continue to be healthy and stay alive. Especially when you live in a dangerous environment to begin with. When you’re not just taking on the establishment, but taking on the establishment of your own community.

Elijah Muhammad did live multiple lives. The man in public as being this morally superior man who could guide the African-American community and show them how to live and improve themselves, was a different man in private. To the point that he cheated on his current wives, had multiple wives, fathered multiple children with multiple women at the same time. And perhaps even ordered hits on people that he saw as threats to his leadership, including Malcolm X.