As unpopular as the pardoning of Richard Nixon was for President Gerald Ford in 1974 and contributed to President Ford losing the election in 1976, it was the right thing for the President to do. Because of all the problems that he inherited as President dealing with the economy with high inflation, high interest rates, the recession of 1974-75, a rising deficit, the ending of the Vietnam War with the Ford Administration having to bring American personal back home from Vietnam safely. President Ford had a lot on his plate already and didn’t have time to deal with the Nixon case and prosecution. 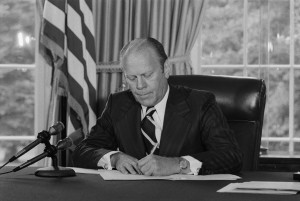 38th President of the United States