The Atlantic: Olga Khazan- ‘A Better Way To Argue About Politics’ 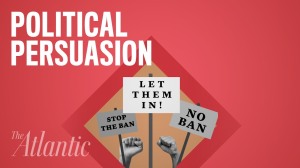 “Liberals and conservatives have fundamentally different moral codes, which makes arguing about policy complicated. Many people have found themselves locked in debates surrounding the now-suspended travel ban, with little success in convincing the other. “One reason it’s so hard to reach across the ideological divide is that people tend to present their arguments in a way that appeals to the ethics of their own side, rather than that of their opponents,” says Atlantic writer Olga Khazan in this video. However, there’s a psychological trick that goes a long way to changing peoples minds. According to the Moral Foundations Theory, liberals are more likely than conservatives to endorse fairness-based arguments and are more concerned with principles like care and equality. So, when discussing a contentious topic, liberals should reframe their arguments to appeal the the moral values of conservatives, and vice versa. “At the very least, you can avoid making things worse,” says Khazan. “If you can’t reframe your argument, just get off Facebook.”

Before I get into what I believe is a better way to argue politics, I want to explain my issues with Olga Khazan’s piece here, because she unintentionally lays out a big problem with American politics which are stereotypes.

According to Olga and she used Socialist Senator Bernie Sanders as her example of a Liberal, which would be like using Representative Ron Paul as an example of a Conservative, even though Senator Sanders is not a fan of either liberal democracy or individual rights, and instead believes in democratic collectivism ( social democracy, if you prefer ) which is very different. And Representative Paul disagrees with so-called Conservatives on a lot of issues especially having to do with national security, foreign policy, but policies that the Christian-Right pushes.

But in a political sense there is another other possible way to think when it comes to politics. You’re either Liberal or Conservative according to the American mainstream media dictionary when it comes to American politics. Liberal or Conservative, Left or Right, as if nothing else exists. And like most things in life American politics especially in a country as large and diverse including politically diverse as we are, life is just not that simple. And to just put people in two political camps in America is at best lazy journalism and at worst just very ignorant as far as how Americans tend to look at politics.

If you go by the stereotypes about what it means to be a Liberal or Conservative, perhaps 3-5 voters are Conservatives. 1-5 voters are Liberals. If you go buy the classic definition of what it means to be a Liberal, that number jumps up to maybe 3-10 4-10, because Americans don’t want big government to try to manage their lives for them and tell them what they can eat, or even say and spend ,most of our money for us. But we tend to believe in the real liberal values like free speech, personal freedom, property rights, right to privacy, equal rights, quality opportunity for all, a safety net for people who truly need it, a strong national defense to protect the country, effective and responsible law enforcement. Things that stereotypical Liberals don’t believe in.

And if you polled what it truly means to be a Conservative someone who believes in conserving the U.S. Constitution and our individual rights, fiscal conservatism, strong national defense, personal responsibility, there might me 3 or 4-10 American voters who share those values.

But if you polled Americans based on what’s called religious conservatism and Christian Nationalism in America and this belief that all Americans should live under the same moral values and there is only one way for Americans to be American and for people who don’t share those values are Un-American, that number shrinks to what’s known as the Donald Trump base. Which is about 20-25% of the electorate and maybe 30-35% of the Republican Party.

One of the great things about American politics and the American political spectrum and why it’s great to debate politics in America is our political diversity. Just like America represents the whole world racially and ethnically, we represent the whole world ideologically as well. From Christian-Theocrats and Nazis on the Far-Right, to Communists on the Far-Left. To Conservatives and Liberals in the middle of those two fringes with Conservatives and Conservative-Libertarians representing the Center-Right and Liberals and Progressives the Center-Left.

On a more lighter note: as far as a better way to argue American politics I would suggest a few things.

One- don’t view your favorite partisan publications and media outlets word as gold. Leave open the possibility that those media outlets might have a political agenda and are simply positing negative stories to hurt the other side or post positive stories to help their side. And of course I’m thinking of MSNBC and Fox News.

NBC News ( the parent of MSNBC ) is a real news operation and more factually base., but MSNBC is a partisan news operation representing the Far-Left in American politics. And Fox News is just Fox News FNC or network, a partisan political tabloid that basically serves as the communication operation for the Republican National Committee.

Two- stay away from partisan media outlets, or at the very least expand your media diet and look to intelligent commentators from the other side, as well as independent reporters who don’t have any political agenda.

Once American voters actually start receiving real information and facts when it cones to politics and government, they’ll become intelligent voters because now they’ll be thinking with these little annoying but very help things called facts. Instead of going off on political spin. Like the insomniac who thinks they can survive without sleep by just pouring coffee and Dr. Pepper down their throats and running a treadmill, two many Americans simply go off what they’re favorite partisans tell them which leaves them without real facts and information.

Three- view people especially political junkies as just people who have strong political viewpoints. If you’re debating someone on the Right, don’t automatically assume that they’re some racist xenophobic, sexist, corrupt, materialistic, selfish, pig, who hates minorities, women, and gays. Especially if they’re on the Center-Right and have a brain.

And if you’re debating someone on the Left, don’t automatically view that person as some Che Guevara/Fidel Castro or even Bernie Sanders loving big government statist. Who hates America and views all Caucasians especially Anglo-Saxons and men and views all those people as racists, who want to eliminate all individual freedom and individualism in all forms. Again, especially if they’re on the Center-Left and have a brain.

Four- debating an talking is great for the brain and a great verbal exercise, but if you watch sports on TV and even go to games you know that all of those events have timeouts, ( except for maybe soccer ) how about you save some of your breath and use your brain for something other than speaking and debating and use it as a a computer and take in information. You’ll learn a few things not just about the person that you’re debating, but you might also learn some things about the issues that you’re debating.

I’m not here to plug any network in particular but if you listen to some of the discussions and debates on CNN from their so-called experts, they actually listen to each other and let the other side speak.

American politics and debate will only get better and American politicians will only become more popular than your average junk dealer or used car salesman ( which is another way of saying junk dealer ) when the people that these politicians represent become better and smarter. When the voters become intelligent and informed and not just operating on 30 or 40% of the story and become informed and engaged voters who don’t see their job as to eliminate the other party, even if that means supporting legislation that if there was no partisan angle to doing it they would’ve never supported before.