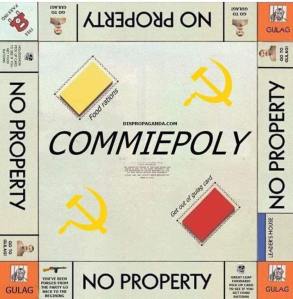 Source:Daniele J. Mitchell– No thanks.

“I sometimes feel guilty when I mock communism. Should I really be joking about an ideology that directly or indirectly caused 100 million deaths? Are laughs appropriate when there is ongoing torture, abuse, and starvation in communist hellholes such as North Korea and Cuba?’

I sort of look at Communists and communism like the way teachers might look at poor students. Students who fail the exact same tests over and over who simply don’t do the work they’re assigned and don’t learn the lessons that they’re taught. That old cliche those who fail to learn from history, are doomed to repeat it.

We know communism doesn’t work, at least anyone with a brain who is mentally competent, sane, sober, and capable of learning. And yet it still exists in a lot of the third world in and now even in a country like Venezuela which is an energy independent country and at one point one of the wealthiest countries in Latin America. Similar to how Chile and Brazil are today. We know it doesn’t work and yet people keep trying to make it work and keep trying to experiment with it.

A look at Communist lack of logic-

“Maybe if we only nationalize parts of the economy, or allow people to own their own property.

Maybe if our state-owned industries are partially privatized.

Maybe if we allow free and fair open elections, Communists will actually get elected and we can hold power that way.

Maybe if we allow for some free and private media, private news organizations will still kiss the central government’s huge over paternalistic ass for fear of being taken over by the regime and thrown into jail.”

None of these experiments work for communism because when they’re tried and people get a taste of freedom, they tend to like it.

Imagine being lost in a desert for weeks perhaps your plane crashes and you have to rely on only what you brought for that trip and then you’re finally recused and you start pouring water down your throats and perhaps try to drink and entire lake, at the same time you’re eating everything in sight including eating things that months ago people couldn’t pay you to eat, but you’re starving and you’ll eat anything. Are you going to go back to being stuck in the hot desert not knowing when you’ll be able to eat and drink anything ever again, or are you going to hang onto your freedom and live in civilization with the freedom to eat an drink whenever you want whatever you want?

Freedom can be addicting. Communism and authoritarianism in general is suffocating and torturing. When people escape communism and authoritarianism in general, they tend to fall in love with freedom and not wanting to live under an authoritarian system ever again. Communists have an ego problem and over trust in government and believe that people are essentially morons who can’t be trusted to put their pants on correctly each morning and therefor need Big Government to babysit them. And as we see now with only North Korea being the only pure communist state left in the world, people tend to like having the freedom to make their own decisions and tend not to want Big Government to do their thinking and decision-making for them.