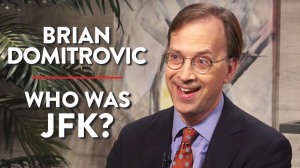 When you’re talking about people who are called Classical Liberals ( the real Liberals ) I believe John F. Kennedy has to at the top of the list. Or at least towards the top of the list. Former Republican presidential nominee businessman Wendell Willkie, Thomas Jefferson, and a few others today. Former Secretary of State and U.S. Senator John F. Kerry, ( one of my favorite Liberals ) is a JFK Democrat and would be on that list as well. People who believe in both personal freedom and economic freedom. Limited but good government that should be used to protect our individual rights and even be used to help people help themselves.

Not that then Vice President Richard Nixon wasn’t a strong anticommunist in 1960, because he was but then Senator John Kennedy was the strongest anticommunist in that presidential election. The Liberals were the anticommunists, as well as FDR Progressives and of course Conservative Republicans. Like Senator Barry Goldwater, to use as an example. Liberals are still anticommunists and antiauthoritarian across the board today, but generally when you think of the Left today there’s not much of a center on the Left anymore. The center-left seems to be dying in America and you talk about the Left in America today you’re generally talking about Socialists. In some cases Democratic Socialists like Bernie Sanders, but in a lot of cases you’re talking about just pure Socialists and even Communists. Socialism including communism, is very popular with Millennial’s today.

But back in the 1950s and even the early 1960s, Liberals were very prominent in America. People who believed in civil rights and equal rights for all Americans. Who believed in free speech and property rights for all Americans. People who believe in personal autonomy for all Americans. Who believed in a strong but limited national defense to be able to defend America from any possible threat, as well as defeat communism and other authoritarian government’s around. And a safety net for people who truly need it to help low-income and low-skilled people in the short-term, while they’re preparing themselves to not just go to work, but get themselves a good job and become self-sufficient. This is the liberalism that Jack Kennedy represented and had it not have been for his unfortunate assassination in 1963, this is the liberalism that he would’ve run on for reelection in 1964 and probably had gotten reelected.

Think about what would’ve happened had President Kennedy not have been assassinated in 1963. He gets reelected in 1964 and we don’t enter the Vietnam War in 1965 and as a result the Democratic Party doesn’t collapse in the late 1960s because of Vietnam and the socialist New-Left perhaps doesn’t emerge as well. At least not to the extent that it became where they could actually get themselves elected to major offices and become a major part of the Democratic Party which nominates Socialist Senator George McGovern for President in 1972.

As far as the JFK tax cut, it was actually President Lyndon Johnson ( Progressive Democrat ) who gets that passed through Congress in 1964. That of course President Kennedy proposed in 1962. And it was also President Johnson who got the JFK 1964 Civil Rights Act through Congress as well. And the tax cut wasn’t a supply side tax cut. They lowered tax rates across the board which was the right thing to do, but he paid for those tax cuts by eliminating tax loopholes. Which is something that so-called Conservatives ( supply siders, really ) today don’t seem to ever mention. They say JFK cut taxes for everyone without cutting spending which lead to all of this great economic growth of the 1960s and the tax cuts paid for themselves. Which is the argument that they used for the Ronald Reagan tax cuts of 1981. Which simply didn’t happen. JFK’s tax cuts were paid for upfront by eliminating loopholes in the tax code.

I’m a JFK Liberal Democrat personally and unfortunately one of the last of the Liberal Democrats in the Democratic Party. The classical liberal wing of the Democratic Party seems to be dying as the Socialists are taking over to the point that in 2020 the Democratic choice for President might be either Senator Bernie Sanders or Senator Elizabeth Warren. But liberalism is how Democrats win national elections and how they can appeal to blue-collar voters., which is what Jack Kennedy was able to do. By pushing for both personal and economic freedom, equal rights, civil rights, a safety net for people who actually need it. Instead of saying that big government can take care of everyone for everyone and individualism and freedom is too risky. Which is what the Socialists in party seem to represent today.