The Onion: Revelations From Hillary Clinton’s New Memoir- What Happened 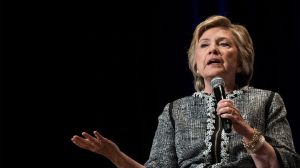 What happened? Hillary Clinton might be the only person asking that question as far as how she’s the first American presidential candidate to ever lose to a reality TV star who for the last 35 years in Donald Trump’s case is mostly famous simply for being a New York celebrity. A career public servant in Hillary Clinton who has serious foreign policy, national security, and domestic policy experience and knowledge, versus a professional reality TV star who was a reality TV star before that term was ever invented.

Hillary Clinton losing to Donald Trump in a presidential election, would be like George H.W. Bush or Lyndon Johnson, losing a presidential election to Paris Hilton or any Kardashian you want to name. Its one of those I don’t believe what I just saw moments and I just saw that. (To paraphrase the great sportscaster Jack Buck) Or the New England Patriots losing the Super Bowl to an expansion team.

I mean, would it have killed Hillary Clinton to eat a cheeseburger in Pittsburgh at any point between September and November last year. Stop for some chill in Cincinnati, have a steak in Columbus. Stop in Milwaukee or Madison, Green Bay and have some bratwurst and beer, even take in a football game. Sure! She probably would have eaten a few pounds and perhaps not have as much wine and cheese and caviar, or whatever fancy yuppie meals she’s accustomed to having in New York, but it would have been for a good cause. Which is trying to get votes that you need when you’re running for President of the United States.

There simply not enough yuppies people who hang out in coffee houses and work in new-tech, or as college professors for a Democrat to be elected President of the United States. And trying to rely on people who generally don’t vote unless they see a candidate who uses the same smartphone as they do, watches the same reality show, shares the same coffee drink as their favorite coffee drink, listens to the same music, (referring to college students and other young adults) there not enough voters there to make up for average Americans who take voting seriously and want to feel a real connection with the people they’re considering voting for. Talking about blue-collar and other middle class Democrats who voted for Donald Trump. As hard as it is to believe.

There’s nothing average and working class about Donald Trump. Except for qualifications to be President of the United States. To say Donald Trump is an average Joe, or a blue-collar billionaire as he calls himself, is like saying that Tori Spelling and Paris Hilton are famous because of their great talents as entertainers. And not because of who their father’s are. I mean, how many truck drivers do you know who own a golf club in Florida, as well as a vacation home and live in a penthouse in New York?

To try to sound serious for a minute (and that might be only a minute) the reasons why Hillary Clinton lost in 2016 are the same reasons she lost the Democratic presidential primary in 2008. It really gets down to one person which is the person that she sees in the mirror when she’s the only one there. To put it bluntly she comes off as an actress and not a real person. Someone playing a part instead of a real person. People in Pennsylvania had more trust and faith in a guy selling Brooklyn bridges and South Dakota beach homes (in Donald Trump) than a woman who might very well be the most qualified presidential candidate we’ve ever seen.

And that has nothing to do with Russia, or the fact that Hillary is obviously a woman, especially when you consider that less than half of Caucasian women voted for her for president. American votes like to know who they’re voting for generally and decided as much as I disagree with this, but that Donald Trump even with his never-ending list of faults that probably deserve multiple great books and documentaries to cover all of them (CNN has produced most of them) that he was a better suited to be President than she was. Even though they overwhelmingly believed that Hillary was more qualified to be President than Donald.

The last and most important reason why Hillary Clinton was appointed Secretary of State in 2009 instead of being sworn in as President of the United States or spending 2017 writing a book on why she lost the 2016 presidential election, instead of being too busy to write a book like that because she has an administration to run as President, has to do with entitlement. Being a Democrat and the first female major presidential candidate, is not enough reason for Americans in at least the states of Pennsylvania, Ohio, Michigan, and Wisconsin for them to vote for her to be President.

American voters are kind of stubborn and even prickly and actually expect their presidential candidates to offer them little annoying things like vision and reasons for voting for them. Other than the candidates saying, “hey, you might not like me, but you should hate my opponent more, because of these reasons.” Not being Donald Trump in 2016 was not enough reason for Americans to elect Hillary Clinton as President. That is why she’s not President Hillary Clinton right now. She didn’t introduce the real Hillary Clinton to enough voters and give enough for them reasons to vote for her and not just against Donald Trump. 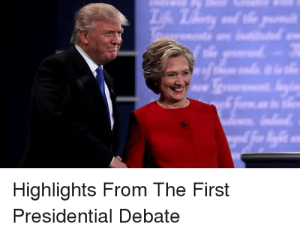 The Onion: Highlights From The First 2016 Presidential Debate