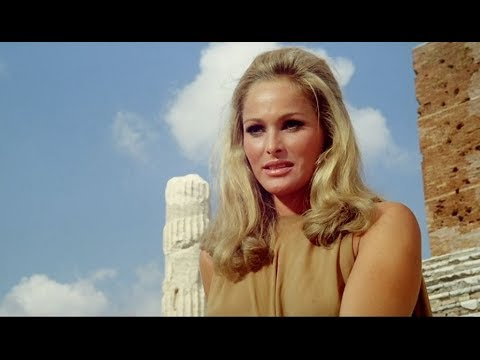 “Ursula Andress and Marcello Mastroianni fall in love while trying to kill each other, endorse products for TV, and avoid being shot by other assassins. And everyone tries to look groovy!” 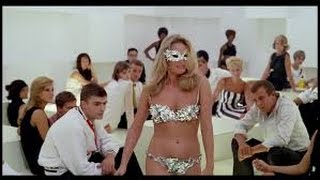 This scene doesn’t look that different from Ursula Andress’s first scene in James Bond’s Dr. No from 1962, where she appears out of the middle of nowhere on the beach in Bahamas wearing nothing but a bikini. She’s a little more conservatively dressed here, ( little, might be an overstatement ) and the plot is a little different.

But here she is with a man she doesn’t trust and perhaps doesn’t even like and is being chased by assassins who want to kill both of them. And they sort of have to work together just to survive the experience.

Just replace Ursula with Raquel, but what’s different: two young, hot baby face goddesses who seem childlike and immature, because they’re so adorable and yet both absolutely gorgeous and very sexy. But both are very sharp and tough and not meant to be messed with, if you know what’s good for you.

Mean Guns from 1997: if you’re not familiar with this movie, you might be on a very long waiting list of people that stretches an entire continent of people waiting to get into the club of people who’ve never heard of this movie, not sure if it even qualifies as a c-movie and other than Ice-T and Christopher Lambert, you probably wouldn’t be familiar with anyone else in the movie, unless you just have some obsession for b and c-movies and watch a tone of them, but the plot in that movie is very similar to The 10th Victim: you organize all the assassins into one place and then let them go at it and try to knock each other off with the sole survivor winning a big pot of money or whatever the award is. With the apparent goal to cut back on violence by having the killers kill each other.

To be completely honest here: (for a change, ha, ha) I’ve never actually watched The 10th Vicim and until 5 minutes ago I’ve never even heard of this movie. And perhaps at some point I’ll watch the entire movie and tell you what I think about it. But the plot and idea has been used since and perhaps before. And it looks like a very entertaining movie ( not just Ursula Andress ) and looks like it’s worth watching based on that alone and perhaps for no other reason.

This is primarily a current affairs blog, but we talk about other things as well.
View all posts by The New Democrat →
This entry was posted in Hollywood Goddess and tagged 1965, Action, Action Adventure, Action Comedy, Europe, Hollywood, Italy, Marcelo Mastroianni, Sexy Women, The 10th Victim, The 10th Victim 1965, The 10th Victim 1965 Movie, The 1960s, Ursula Andress. Bookmark the permalink.