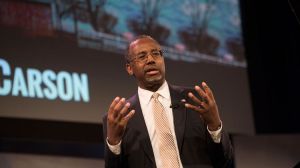 During really the last six years or so of the tax cut and deficit reduction debate in Washington, people who call themselves Conservative Republicans, have argued that they wouldn’t support a tax increase, or a tax hike under any circumstances. The so-called fiscal cliff and the extension of the Bush tax cuts in late 2012 was part of this. However Representative Michelle Bachmann, when she ran for president in 2011, her campaign didn’t make it to 2012, or she ran for president in a non-presidential year, argued for increasing taxes on low-income workers. Adding an income tax to their payroll taxes. Ben Carson and others, now support a 15% flat tax that would be a fifty-percent tax increase on lower working class workers who currently pay 10% in federal income taxes before refunds and so-forth.

If you’re truly against tax hikes at any point, then you’re against any flat tax that raises taxes on anyone. Every flat tax that has ever been proposed has been both a lower and middle-income tax hike. I have a hard time taking anyone seriously who call them self even a fiscal, or economic conservative, when they support a flat tax. Because they’re supporting a lower and middle-income tax increase, but also on the people who American economy depends on the most to drive economic growth. You pass a lower-income tax on people and they’ll stop working and become completely dependent on public assistance, because they can’t afford your tax increase. We need to encourage these people to not only work, but further their education so they can get a good job and no longer be low-income. Not discourage them to work at all.