Posted on September 2, 2013 by Ederik Schneider

Source:Daily Mail– British Denim Diva Carol Vorderman. This baby as a lot of back.

“Carol Vorderman looked as though she might be wearing SPANX under her jeans as she performed on Lip Sync Battle UK.

The television presenter, 55, who famously won Rear Of The Year in 2014, showed off a tell-tale line under her skin-tight jeans as she danced on the stage of the star-studded show.

Performing All About That Bass for the Channel 5 show, when she impersonated chart-topper Meghan Trainor, all eyes were on her pert posterior as she embodied her pop star alter-ego.”

From The Daily Mail

I think what you get from Carol Vorderman is someone who knows she beautiful and sexy not just proud of those facts, but believes the rest of the world deserves to see how attractive she is. And she also loves, if not in love with denim, especially skin-tight denim. And there really isn’t any better way for a beautiful, sexy woman to show off their body in style and do it with class, then in skin-tight denim jeans, especially with boots. 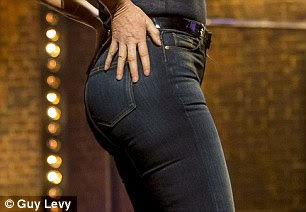 “Carol Vorderman in Very Tight Jeans Dancing.” Originally from Channel 5 in Britain, but the video has since been deleted or blocked on YouTube. “Girls on Box: Carol Vorderman Touching & Shaking Amazing Ass.” From Girls on Box, but the video has since been deleted or blocked on YouTube.

Here’s an opportunity to check out British Denim Diva and TV host Carol Vorderman from the front. I doubt anyone is disappointed. 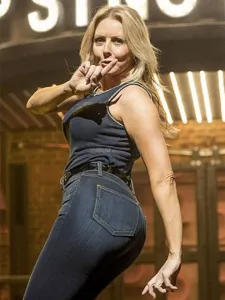 I love Carol Vorderman, physically. She seems mostly physical to men and someone with a great body who promotes that and that is basically what all her fame is about. But I guess you use what you have and if you’re successful you use as well as you can. But she does have a great body. Good height, strong tight body. Great legs and a beautiful butt.

And perhaps what I like about her most is that she shows off that body very well and wears skinny and skin-tight jeans a lot. I think you’ll have a real hard time finding a women who looks better in skinny Levis than Carol.

Carol Vorderman is known as a game show assistant. I person who moves the pieces on the board. And there primarily very for her physical sex appeal. But she’s so good at that and so open about her body and sex appeal that you have to give her hats off for that and tell her job well-done. And you can’t wait to see her again.