Posted on January 8, 2016 by Derik Schneider 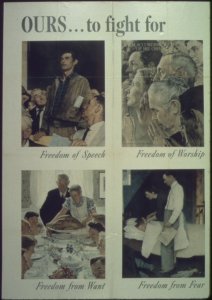 President Franklin Roosevelt with his Four Freedoms speech, was essentially arguing for a society where everyone would be free not to have to go without. Because there would be a big federal government big enough to prevent that and be able to take care of everyone. Because everyone would have what they need to live well, because it would be provided for by government. At least for people who didn’t work, or simply didn’t make enough money to support themselves on their own.

If you’re familiar with this blog, you know I’m a big believer in both Freedom of Speech and Freedom of Religion. But this idea that we would have freedom from want, or freedom from fear, sounds very utopian and like someone’s fantasy. Perhaps a fantasy that comes from drinking too much, or smoking pot that is stronger than you thought it was before you smoked it. I don’t make fun of people who want a world where there is no poverty and fear. But coming from and living on Planet Earth my whole lifetime, I’ve learned that it helps to have a healthy sense of reality in life. What’s possible and what might be out-of-reach and what is the best that we can do at the given time.

To create a society where there’s no such thing as poverty and fear, you got to create an economy where everyone has the ability to succeed.Where everyone can get themselves a good education, where their good jobs and modern infrastructure in every community. Where people have the, yes freedom to succeed and even take risks even if some risks don’t pay off. And then you have an insurance system for people who truly need it to help them when they fall down. And need help getting by in the short-term, but also get help to get themselves up and live in freedom on their own.

You create a society where everyone is essentially dependent on government to take care of them and people won’t feel the need and freedom to succeed on their own. And more people will end up dependent on big government to take care of them. And people can point to Scandinavia all they want to, but very small countries in population, with a lot of land, that are not just energy independent, but export their energy and use those resources to fund very generous big centralized welfare states. America, is obviously not like that. Which means for this country to succeed the people need have to have the ability to succeed on their own.