Keith Hughes: What is a Libertarian? 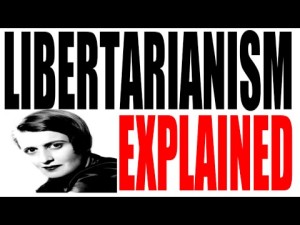 Source: Keith Hughes: What is a Libertarian?

I just gave you two types of Libertarians. The Liberal Libertarian, Gary Johnson. The Classical Libertarian, Ron Paul, I agree with Keith Hughes on that one. The Conservative Libertarian, Rand Paul who is a little to the Right of his father on national security and foreign policy and to his father’s left on economic policy. Senator Paul is more of a Federalist as it relates to social insurance the safety net. As opposed to his father who simply wants to eliminate the public safety net all together. And then there Anarcho Libertarians. People who are essentially anti-government all together. But don’t officially at least support eliminating all government.

So what do all these labels mean? Lets start with the Classical Libertarian, libertarianism in its realist sense and go from there. The Classical Libertarian is not just anti-big government all together where I am as a Classical Liberal lets say. But they are pro-small government and would essentially cut the Federal Government down to the size it was in the 1920s or so. And tell Americans to live their own lives as they see fit, as long as they aren’t hurting anyone with what they are doing. And if they get into any economic trouble and need assistance, go to their friends, family and private charity for assistance.

Now the Libertarian I actually respect and can talk to and learn from and are interested in and if I was in government I could probably work and personal know and like some of these people, are the Conservative Libertarians. Go back to the 1950s, 60s, 70s and 80s and you’ll find Barry Goldwater leading that camp. Go to whatever this current decade is called now and you’ll see Rand Paul leading this wing on the Right. People who are again anti-big government and believe in both personal and economic freedom, but aren’t looking to eliminate governmental functions they see as useful and constructive. The safety net comes to mind. But more interested in getting those programs out of the Federal Government and down to the states, locals and even privatization.

Now the Liberal Libertarian, Classical Liberal or even real Liberal, I just go by Liberal for myself. But we are in sync with the Conservative Libertarian and Classical Libertarian on freedom of choice and personal freedom issues. Don’t like big government running our economic or personal affairs for us. Don’t like the welfare state or nanny state. But we aren’t so much anti-government and look to put it down, as much as we are anti-big government. We believe in government, but we want it limited to so it works. And when it comes to helping the less-fortunate, we wants those programs to empower people as much if not more than taking care of them in the short-term so they can live in freedom as well.

The Anarcho Libertarian, think Anarchist and not much of a difference. Lew Rockwell, if you are familiar with his politics who on his blog it days pro-market, anti-state. Unless you are an Anarcho Libertarian, you get into a political discussion with them and you may think you are at a Star Trek convention, ( no offense to Trekies ) But when it comes to Libertarians, they go from the center-right where Conservative Libertarians and even Conservatives are, all the way over to people who are essentially anti-government all together. So it depends on what you mean by Libertarian.

1 Response to Keith Hughes: What is a Libertarian?