Today U.S. Representatives Anthony Weiner, Democrat from New York, New York City to be specific, stepped up to the plate and hit a home Run. (Sorry for the baseball analogy for you non-sports fans) And did the right thing by resigning his seat in the House of Representatives. As I’ve said before it’s not what Representative Weiner did that was wrong with his own private time, (well his wife might disagree with that) and yes members of Congress do have private time, they are not always at work, just look at the U.S. Senate, I rest my case. When do they ever work?

It’s not what Representative Weiner did with his free time that’s the problem with me and a lot of other people. As a liberal I could care less with what people do with their free time. With what Representative Weiner did is between him and his wife and their family if they have one yet. It’s the consequences of his actions that are the problem, the fact of how public he alone made them by sharing them on Twitter and professional status that’s the problem. We are not talking about Joe Jones truck driver, not that there’s anything wrong with Joe Jones truck driver. I’m sure he’s a fine man, I’m not trying to sound like a snob or something here.

We are talking about a U.S. Representative and a member of Congress, a constitutional officer and a public official. The fact in today’s information age, what people do in public especially public officials, the whole world literally gets to see it. And in a way is all of our business whether that’s the right thing or not. Because of the fact that we all have the ability to weigh in on it. As I’m doing now by blogging about it, but blogging is not the only way to weigh in on stories like this. WordPress, YouTube, Facebook, Twitter, MySpace go down the line. And that’s enough plugs on my part, no wait I forgot my personal favorite Blogger.

Because of Representative Weiner’s irresponsible actions to post in public his affairs so to speak, the U.S. House especially the Democratic Leadership and the rest of the Democratic Caucus, are forced to deal with it in one way or the other. Either take questions about it, or take official actions, which is apparently what the House as a whole was preparing to do. Which is to file and investigation into the Weiner story. (The big Weiner story) Politically this would be bad for everyone, House Democrats for having to deal with this story with hearings and investigations as well as the House GOP.

But it would be a huge distraction especially for the House Democratic Leadership who as of right now are in good position of retaking the majority in the House in 2012. And pushing their own agenda once they were to retake the majority. Thanks to House GOP mishandling of Medicare back in April, but the House Democratic Leadership were already breaking records in fundraising and recruiting candidates to take on the 62 Republican freshmen from 2010.

And the House GOP Medicare fiasco just reinforced that, but with the Weiner story, instead of concentrating on their own agenda they have to concentrate on Representative Weiner instead. So I’m glad Representative Weiner stepped up to the plate today and did the right thing and stepped down from office. Which I hope will bring and end to this story, which I think will continue, but at least he did his part to close this ugly chapter. 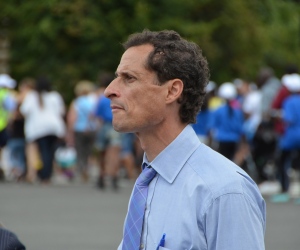