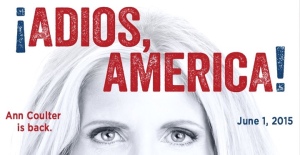 No, this is not the Ann Coulter Report, or the Ann Coulter Blog. If it was, I would be a workaholic, dedicated to the life and career of Ann Coulter and probably be a Red Bull and Starbucks addict, in order to have the energy to do that. But intentionally I believe, she has the ability to get the attention of everyone who disagrees with her on most of the issues. Which is probably 80-90% of the country. Her latest book on immigration reform, where similar to Pat Buchanan and Ann, is just as Far-Right and perhaps even further Right than Pat, on foreign policy, where they both argue that Latino immigration is destroying America, is a perfect example of that.

Neoconservatives in America, are in love with the 1950s. Actually go back to the 1920s, or even further back than that before women could vote in America. And they believe America has become like Europe economically and culturally. Even though America takes in a lot more immigrants than Europe every year. Which is why our population is growing and they are shrinking. As well as our economy being much stronger than Europe’s since the Great Recession. Neoconservatives in America, who tend not just to be Caucasian, but Anglo-Saxon as well and whose family came from Britain, tend to see Americans who don’t look, talk, think and live their lives as they do, as Un-American.

The Far-Right, being against immigration is nothing new. They were against the Poles and other Slavs, immigrating to America, as well as the Italians, Jews and Irish, in the early 1900s, because these ethnic groups look different from Anglos and practice a different religion. So why would Latinos, who in most cases ancestors originally came from Europe, in Spain, be any different. Ann Coulter, will probably make a lot of money on her book, even from people who want to see how far out and off based she is. As well as from people who are dumb enough to take her seriously and agree with her. But her book won’t change the political situation. Most Americans, including the conservative Chamber of Commerce, are comfortable with people of other races and ethnicities now.