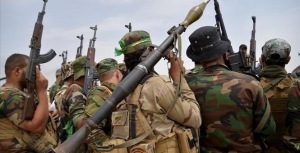 Thomas Sowell, said in his piece that China wasn’t America’s to lose in the 1940s, but then suggested President Barack Obama lost Iraq. As if Iraq was America’s to lose. Last time I checked, America doesn’t own Iraq. We no longer occupy Iraq. This might be the first and last time that I’ll ever quote Vladimir Putin on anything, at least something that I agree with him on. But he was asked about Russia’s invasion of Ukraine in 2014. And he said, “a country that can’t defend itself, is not a country.” What I would add to that is a country that can’t, or won’t defend itself and Iraq certainly qualifies as that, is just a piece a land where people live.

During President Bush’s administration, it took them four years just to get Iraq stabilized. Because they didn’t have enough troops to occupy the country in the first place. And under the Bush/Cheney policy, America would stay in Iraq until there are no longer any dangers and security challenges in Iraq. They would say that we would stay there until Iraq can defend and govern themselves. Which tells Iraq that they don’t need to defend and govern themselves, because America will always do that for them and our taxpayers will always pay for the government and defense of their country.

President Obama, figured this out pretty quickly when he came to office in 2009. That for Iraq to ever become stabilize and be a place that can govern and defend itself, they need to know that America won’t be there to that for them indefinitely. That they need a government and security forces than can take care of and defend the country themselves. That the Obama Administration will work with and help the Iraqi Government as long as the Iraqi Government and the Iraq people are doing what they can for themselves. Under the Maliki Government in Iraq, what they did was centralize more power with the Central Government, especially with Prime Minister Al-Maliki and became corrupt. And lost the trust of the Iraq people and lost their power as a result.

Iraq, post-War in Iraq and Saddam Hussein, has had their own government for ten years now, going back to 2005. We’ve been training their defense forces for what twelve years now. And that’s because the Bush Administration kicked out the old Iraqi military and they started from scratch. In the midst of a civil war in Iraq. A country that can’t and won’t defend itself, is not a country. Iraq was never America’s to lose, because we never owned it. We went in their by ourselves for the most part and have paid for most of the costs of our being there and occupation. Along with millions of Iraqi’s who have died. If anyone lost Iraq, it was Iraq themselves.