Sony Pictures: California Suite (1978)- A Movie About The Roller Coaster of Life 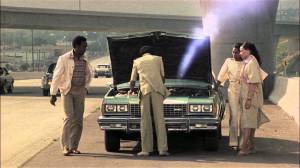 “CALIFORNIA SUITE is the story of five couples who have come to the Beverly Hills Hotel for diverse reasons and who must all confront some rather amusing personal dilemmas. Sidney Cochran (Michael Caine) becomes the victim of wife Diana’s (Maggie Smith) outrage when she misses.”

“Four totally different and separate stories of guests staying at the Beverly Hills Hotel. Diane Barrie (Dame Maggie Smith) and Sidney Cochran (Sir Michael Caine) come from England to attend the Oscars; Hannah Warren (Jane Fonda) comes from New York City, Bill Warren (Alan Alda) is her ex who lives in California; in the slapstick part, Dr. Willis Panama (Bill Cosby), Dr. Chauncey Gump (Richard Pryor), and their wives come to the hotel to relax and play tennis, only to find there is only one room vacant; in the fourth segment, Marvin Michaels (Walter Matthau) arrives a day before his wife for his nephew’s Bar Mitzvah, while his brother Harry (Herb Edelman) sends a prostitute to his room. Written by Jonathan (jrd@netvision.net.il)” 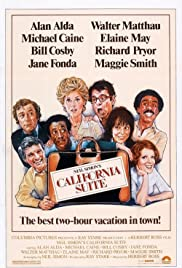 Source:IMDB– The cast from California Suite (1978)

I’m sorry, I wish I could’ve found a better video that would’ve shown all three couples, or groups in this movie that would’ve given you a better idea about what this great romantic comedy is about. But I guess you’re going to have to take my word for it, or see the movie yourself.

This is one my favorite comedies of all-time that I saw again on Friday in preparation to write this piece. This is one of the smartest written and funniest written comedies of all-time, with one of the funniest casts that you could put in a movie. People who should all be in the Comedy Hall of Fame, when you’re talking about Bill Cosby, Richard Pryor, Walter Matthau, Alan Alda, Michael Caine, and Jane Fonda.

You have an African-American foursome coming to LA from Chicago. A Jewish-American couple from Philadelphia to attend a, well Bar Mitzvah. (What else) And then there’s a divorced couple. The woman coming from New York and the man coming from the San Francisco area. And they are meeting in Los Angeles for some reason and they are meeting to talk about their daughter’s future. Apparently little Sally doesn’t like living with Mom and wants to live with Dad instead.

The divorced couple played by Alan Alda and Jane Fonda is interesting to me for several reasons and I will give you a few of them. One, the humor in the movie matches Al and Jane, (let’s call them) very well. It is as if the humor in this movie was written for them as far as all the sarcasm and quick-witted jabs and one-liners they deliver in the movie.

Alda and Fonda have a very similar sense of humor in real life, if not the exact same humor and they are both great comedic actors. It’s as if Alda is doing this movie on M*A*S*H as far as the humor between him and Jane. Jane Fonda has a great line in this movie where she tells Bill her ex-husband: “Billy you’re not a hopeless romantic. You’re even worst: you’re a hopeful one.” Sounds like a line she could’ve come up with on her own.

Then there’s the Chicago couple where Bill Cosby and Richard Pryor, well their characters that is take their wives out to Los Angeles from Chicago on vacation. They are both doctors and best friends and yet they try to kill each other in this movie.

If you are familiar with the movie Planes, Trains and Automobiles, you’ll love this part of California Suite as well. But this time the two men don’t just know each other, but they are best friends and have their wives with them. It is was one disaster after another for them in LA. Starting first in a rental car coming from the airport to their Beverly Hills hotel. The car overheats and they have to pull over and they all get out, but lock the keys in the car. And it just gets worst for them after that.

Then the couple from Philadelphia played by Walter Matthau and Elaine May. For some reason they fly to Los Angeles separately and the Matthau character meets up with his brother who he hasn’t seen in like forever. His brother played by Herb Edelman, I guess is single and perhaps coming off his fifth divorce and is a playboy. And gets his brother drunk at dinner and sets him up with a hooker to be there for his brother when he gets back to his hotel room. They get drunk together again and do God knows what. The next morning he can’t wake his hooker up and wife is on the way and you can imagine the type of problems he’s now dealing with. And it is really Walter Matthau at his funniest.

This is not a movie for people who only like cookie-cutter humor and need to of heard a joke like ten times from late night TV or their favorite comedians or sitcoms, or whatever before they can understand the one-liner and smart ass cracks in the movie.

And the humor in this movie also moves very fast with one great one-liner after another. So you not only need to pay attention to what you’re hearing, but do it quickly, because another quick joke is on the way. Played with I’m sure a lot of comedic improv in it as well, especially in a comedy that has Walter Matthau, Bill Cosby and Richard Pryor in it. And I believe is one of the best comedies of all-time.

1 Response to Sony Pictures: California Suite (1978)- A Movie About The Roller Coaster of Life