I’ve never been to Fantasy Island, but now I think I know what it looks like. An African-American President of the United States, not the Federal Republic of Nigeria, but of America in 1977. Sorry, don’t believe it, but hey this is TV where fantasies almost look real. Where the good guy always get’s the bad guy and where the underdog in most cases always come through and wins the big game or the big battle. And where little unknown people become the heroes and save the day.

Barack Obama was a sophomore in high school when this show came on the air in 1977. That failed after four episodes, but not because it was a bad show, but because it was dealing with subjects that most Americans and I bet regardless of race weren’t ready to deal with it. I mean the 1970s when we are talking finally desegregating schools to the point that African-American kids were bused halfway across town so they can go to a mostly Caucasian schools in the name of racial justice.

And where I believe a lot of Caucasian-Americans who weren’t racist, but thinking it was no longer the 1960s and the civil rights era was over and that things would go back to normal the way it was in the 1950s. And that because of the civil rights laws of the 1960s and the Great Society and everything else, that African-Americans got what they deserved with that progressive legislation and that nothing else needed to be done. Which even thirty-seven years later that sounds like garbage. And what Pryor and others were trying to do was to show more Americans that more work needed to be done. 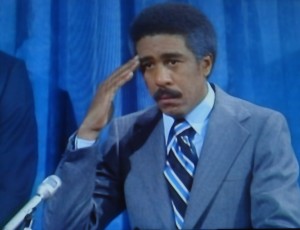