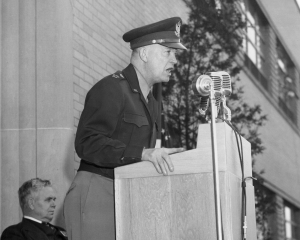 This post was originally posted at FRS Daily Times Plus

Ike didn’t believe that America is an evil country part of some evil-empire, that has nothing but capitalist greedy pigs. Or something holding the rest of the world down, the opposite was true. Because Dwight Eisenhower was a real American hero and American patriot. Who loved his country, but saw the American Military growing faster than he believed it needed to.

And that the growth of our military industrial complex was a threat if it went unchecked. And gave civilians who never served in the military some feeling that our military could do anything and that “we have all the resources both economic and in weapons to police the world or something.” What President Eisenhower believed was that a strong military is a military that’s limited to only do what we should be doing and that there’s an actual limit to what it can do to secure our nation and be a force for peace in the world.