I’ll explain what I mean by collective speech later. But the hypocrisy of the political correctness movement is so obvious. They’re not against hate speech, or offensive speech, per say. They’re against offensive speech that they disagree with. You want to make fun of rednecks, just as long as they aren’t Caucasian, no problem. Christians, again as long as they aren’t Caucasian, no problem. Caucasian people in general, especially if they’re on the Right, no problem. Its minorities religious and racial, specifically, as well as women on the Left and Eastern religions, that PC warriors, believe deserve special protection in America. They believe minorities, shouldn’t be forced to live in a liberal democracy, where people can say whatever they want.

James Allen, had it right, when he said that PC warriors don’t have a sense of humor, at least when it comes to anyone whose not Caucasian. But you can make all the redneck, Anglo-Saxon and Christian jokes all you want. But criticize Islam, or Urban America, or hip hop, or make a joke about Asians when it comes to driving, or their eyesight, or how Middle Easterners dress, you’ll be branded as a racist. You make fun of gays and lesbians and make a butch joke, about a dykish lesbian and you’re not only a homophobe, but a sexist. You make a gay joke a feminine gay queen and you’re a homophobe. But you make fun of butch masculine straight men and their masculinity and you’re funny.

So, its not offensive speech that is offensive to PC warriors. Its offensive speech towards groups of Americans that they believe deserve special treatment that no other Americans deserve according to them. And as far as collective speech, again not free speech that PC warriors are in favor of. Because with free speech people are able to say essentially whatever they want. Short of inciting violence, harassment and libel. But speech that the collective, that society together views as appropriate that they are in favor of. And I’m just glad PC warriors weren’t in charge when the U.S. Constitution was put together. Because, for one we might not have a Constitution today. But we certainly wouldn’t of gotten the liberal First Amendment that we have now. 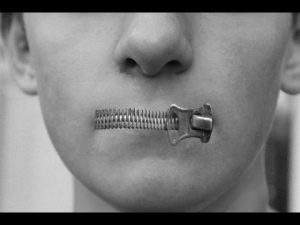 You Can’t Say That