Sam Harris: Waking Up With Sam Harris- Mark Lilla: What Happened To Leftism 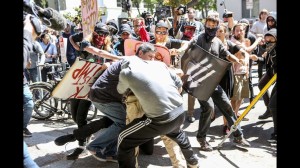 It sort of pains me to say this (ha, ha) but this is an area where I agree with right-wing talk show host and writer Dennis Prager. He separates liberalism with what he calls leftism. Leftism to him is this fringe left-wing political movement in America that sees as its role to defend the under dog generally and almost always racial and sometimes ethnic minorities who are also of Caucasian background. Jews, Latinos, and other ethnic groups that have a history of being discriminated against in America. As well as religious minorities like Jews again, Catholics of all sorts of ethnic and racial backgrounds and Muslims who are of different ethnic and racial backgrounds today and aren’t just Arab, but from other Middle Eastern backgrounds as well.

What Dennis Prager would call a Leftist and supporter of leftism, is someone who sees their job as to defend anyone who would be an underdog and someone who faces discrimination from the majority European Protestant majority in America. Especially English-Protestants in America. Back in the 1930s and 1940s, Progressives were the people defending Jews from ethnic genocide in Europe and took America to war in Europe to fight Nazi Germany and try to save European-Jews from the Nazis. The 1950s and 1960s, Progressives and Democratic Socialists in America, people like Dr. Martin Luther King, were campaigning and organizing for civil rights to protect African-Americans from racial discrimination. Which is what became the civil rights movement. From the 1970s and on Progressives and Democratic Socialists, have fought for equal protection for gays.

What we’re seeing today is not much of a progressive movement on the left, certainly Far-Left. What we see now are Far-Leftists who in many cases aren’t just illiberal, but also regressive. People who not only believe that underdogs (meaning minorities) deserve special protection in society, but have some special right to not be criticized and have to hear anything that is critical and negative about them. Even if the criticism and negativity is accurate about them. For example saying that Muslims believes women are inferior to men and that there are Muslim nations in the Middle East and other places where women are inferior under law to men, that pointing these facts out in public is somehow racist and bigoted towards Muslims.

Ben Affleck who is the perfect example of why entertainers shouldn’t automatically be considered a credible source when it comes politics and current affairs. Said that criticizing Muslims is racist. Well, Ben gets a couple things wrong there. The obvious one being that Muslim is not a race, but people who follow Islam. The second problem that Ben has is that simply critiquing Islam is not bigoted. Especially if your critique is accurate.

What I’m talking about here is the so-called social justice warrior movement, which is really the political correctness movement on the Far-Left. People who believe that minorities have a special right not to be criticized. Unless those minorities are right-wingers then right-wing minorities like Professor Walter Williams who is African-American and a Libertarian, someone like that can be criticized by the Far-Left in America according to the Far-Left. Because someone like Walter Williams or Thomas Sowell, are considered sellouts and Uncle Toms and not considered what militants on the Far-Left and Far-Leftists in the African-American community, they would say that Williams and Sowell aren’t black enough and are what they would called whiteys with black skin.

Dennis Prager separates Liberals, which is what I am and proud to be, with Leftists or what I would call Far-Leftists. People who are Socialists and in some cases who are mainstream Democratic Socialists who want to maintain private enterprise in America, but combine it with social democracy. But who are still small d democrats. The Bernie Sanders movement in America.

The Bernie Sanders movement in America are still Far-Left when it comes to their economic and political views in America, but who look mainstream compared with the fringe socialist political correctness Far-Left in America who have Communists and Anarchists in their movement. Who see it as their job to tear down the American system and American form of government. Who have violent tendencies and believe the Far-Right and other right-wingers don’t have a right to even exist, let alone speak in America. That free speech in America only protects the Far-Left.

Dennis Prager separates Liberals from what he calls Leftists and what I call Far-Leftists. I only say that again to make this point. I separate Far-Leftists with Liberals and Progressives. Progressives are the people I mentioned in the first two paragraphs the people who fought to save the European-Jews from the German Nazis in the 1930s and 1940s. Who fought for civil rights laws in the 1950s and 1960s to protect African-Americans, as well as other racial and ethnic minorities, as well as women of all racial and ethnic backgrounds from discrimination under law and in the private sector. Who fought for the creation of the American safety net for people who truly need it which is what gave us the New Deal in the 1930s and the Great Society in the 1960s.

Progressives are people who believe in progress and using government to build a better society where everyone can succeed. Using government from revenue that was created from a large private sector to build a better society for everyone. When I think of Progressives I think of people like Franklin Roosevelt, Harry Truman, Lyndon Johnson, Hubert Humphrey, Robert Kennedy, people of that ideological background.

What we see now from the New-Left that was originally created in the 1960s and has always been around since because of fringe leftists from the Baby Boom Generation, as well as their children and grandchildren, are people who are just illiberal (which is the opposite of liberal) but people who are regressive. Which is sort of the opposite of progressive. They’re regressive and even fascist because they are people who believe that people who don’t think like them and look at the same world as they do, don’t have a right to speak and even exist. They’ll even use violence to accomplish their political goals.

What has happened to leftism as Dennis Prager and I would call it, is that the Far-Left has almost completely separated from the Center-Left, which is what we’re seeing in the Democratic Party. Before the Center-Left and Far-Left could work together accomplish similar goals. Now they see each other as opponents. And true Liberals and Progressives, should separate from Socialists and especially Communists, because the Far-left is illiberal and regressive and don’t represents our values.

Sam Harris: Waking Up With Sam Harris- Mark Lilla: What Happened To Leftism?