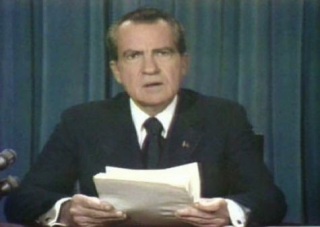 It is clear that President Richard Nixon had to go and even Republicans then and now will tell you that. Perhaps even a majority of them and the only question was how that was going to happen. Somewhat voluntarily with the President resigning, or Congress forcing him out with impeachment in the House and conviction in the Senate. But I don’t think anyone unless they actually hate the man, I mean seriously hate the man and not just saying that should get any joy from it.

The Nixon resignation ended one of the saddest and worst chapters in American history where you literally had a President and his team committing criminal acts while in office. The Chief Executive of the United States ordering criminal acts. With the Chief Law Enforcement Officer of the United States the Attorney General John Mitchell covering up the acts. So that is the horrible part of this chapter, but how about the sad part.

I’m a loyal Liberal Democrat and I don’t see Richard Nixon as evil. Without Watergate and the other criminal activities like the break ins and I understand that is a lot to leave out, sort of like saying had the 2007 New England Patriots who went 18-1 had a good defense and a strong running game they would’ve not only won the Super Bowl that year, but perhaps gone down as the best team of all-time with a 19-0 record. I understand all of that, but leaving aside President Nixon’s weakness’s and it would’ve depend on how the last thirty months of his presidency would’ve gone down, he would’ve gone down as a great President.

If you look at the facts that President Nixon was twenty-years ahead of everyone in the country when it came to foreign policy with Russia and China. Or that he ended our longest war the Vietnam War. Or that he was more than twenty-years ahead of his time on Welfare reform calling for Welfare to Work as early as 1969 to go along with education and job training. Or that he was already pushing for energy independence and even ahead of Jimmy Carter on that. The 2010 Affordable Care Act, a lot of the ideas in that plan come from the Nixon Administration. Expanding health insurance through the private sector and regulating private health insurers.

President Nixon wanted to reform not end the safety net in America with his New Federalism Policy. That wouldn’t turned the programs over to the states and localities to run them with the resources to run them. And actually use these programs to move people out of poverty, instead of leaving them in poverty with a few more bucks. Nixon leaves his mark on Gerald Ford, Ronald Reagan, George H.W. Bush and Bill Clinton and Barack Obama. Even if none of these former president’s and the current president wants to be associated with them. And not just as it relates to executive power, but when it came to public policy as well. Because they saw that those policies actually work.

The Nixon Presidency unfortunately is a “what could’ve been presidency had only certain things didn’t happen”. But it is still an important and critical presidency and a lot of that being for positive reasons. Because of what they accomplished for the country in foreign and domestic policy, but also because of what they were working on that they didn’t finish because of course of Watergate and the resignation. Which of course is President Nixon’s fault and is a  presidency that not only deserves to be remembered, but respected as well.