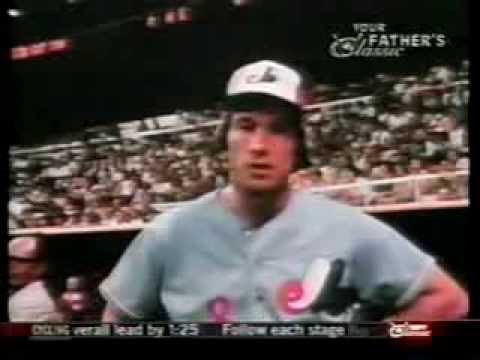 Source:MLB– Montreal Expos catcher Gary Carter, on The Week in Baseball, in 1979.

1979, is still one of the best seasons in Major League Baseball and another example of why MLB should’ve went with the wildcard playoff format much earlier than they did, which was 1995.

You had three teams that won 90 or more games in the AL East alone: the Orioles, Red Sox and Milwaukee Brewers. The Yankees, won 89 games, but had a better record than the Anaheim Angels, that won the AL West. But because of no wildcard and that only division winners qualified for the playoffs, the Yankees didn’t qualify. The Orioles, were the only team in the AL East that made the playoffs in 79. Even though four AL East teams won 89 or more games.

In the AL West, the Angels won the division with 88 games. Their first division championship ever. And two clubs in the Kansas City Royals and Texas Rangers that battled them for that division.

The NL East, you have a very good divisional race as well. With Pirates winning that division, who won several division championships in the 1970s and won two MLB World Series as well. The Montreal Expos, who up until the late 70s, were consistent losers, made a strong run at the NL East, but finished three games back of the Pirates. The Expos, were actually very good in the late 1970s and early 80s and even the early and mid 1990s. But only made the NL Playoffs once in this whole period, because they only won one division championship.

The NL West, only two teams with winning records, but two good teams. In the Reds and Houston Astros. The Reds winning that division with 91 wins, with the Astros finishing a couple of games back.

In 1979, you had three great division races. The AL West, NL East and NL West. And even though the Orioles won the AL East by seven games, they also won 102 games that year. And we’re in a division with two other clubs that were good enough to be very good playoff teams, that won 90 or more games as well.

And the Yankees, again if they were in the AL West, would’ve won that division. MLB, was behind the times back then and should’ve expanded their playoff format much sooner than they did.