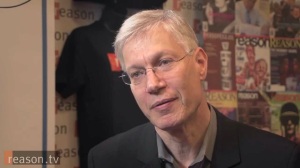 Even though Ayn Rand didn’t describe her own politics as libertarian, Libertarians love her because she was always talking about the importance and need for individual freedom. And we as individuals should be free to live our own lives and worry about ourselves. As well as the dangers of coercion, especially from government. That government shouldn’t be forcing people to do things. Just punish people when they hurt innocent people. As a Liberal I love the idea of individual freedom, as long as someone is not using that freedom to hurt innocent people.

That government shouldn’t be in the business of protecting free adults from living their own lives, as long as they don’t get in the way of other free adults in living their own lives. And they aren’t hurting innocent people along the way either. But as a society that we also have a responsibility not to take care of each other, but to help people who can’t take care of themselves. Empower those people to be able to have the freedom to take care of themselves and live their own lives. This is a big difference between me and Libertarians as well as Ayn Rand. Who would simply just say this is not the business of government, that private charity should be handling this themselves.

Freedom works best when as many people as possible have it and where we aren’t hurting innocent people with our freedom. And when we are empowering people who don’t have that freedom, because they don’t have the skills to take care of themselves, get those skills so they can take care of themselves. Freedom doesn’t work very well when we have a high concentrated population of poor people, compared with the rest of the country.

Take parts of Mexico to use as an example. Where some people there have so little freedom in their own country, that they feel the need to leave their homeland to live in a country where they can get freedom. Emigrating to America to use as an example, or in this country where our poverty hasn’t gotten that bad yet. But where some Americans become so desperate, that they do things that they wouldn’t otherwise do, just in order to survive. Because they don’t have enough money, or food to use as examples and end up going to jail.

So what we should be doing is building a liberal democracy where people have the individual freedom to live their own lives. As long as they aren’t hurting any innocent people with their freedom. Where government isn’t trying to protect people from themselves. But where everyone has the opportunity to freedom, because they can get themselves to not only live in a free country, but have the skills to be free in a free country.