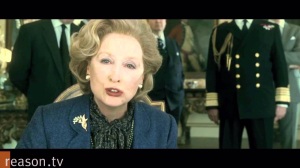 I saw the Iron Lady, the Meryl Streep bio movie about former United Kingdom Prime Minister Margaret Thatcher back in May. And I was expecting a great movie about one of the most important world leaders, in at least the last thirty years. And I was disappointed, I don’t believe this movie was intended for political junkies. Or even people who love history such as myself, whether its American history or world history. This movie was intended for people who love movies and feel the need to be entertained.

That consider the idea of learning about important historical events and people as not interesting enough to watch that type of thing or read about it. So they see a movie and hopefully its more dressed up for them and comes off as more and I hate this term to describe things like this, but as sexy. One credit I would give the Iron Lady and something that I was pleasantly surprised by, was that this movie didn’t try to make Maggie Thatcher look like some type of Conservative fool. Who was interested in selling out the interests of the country to private business interests and didn’t care about the needy and was always looking to go to war. I think Meryl Streep did a very good job of playing Maggie Thatcher as the person she was. And not some Hollywood Leftist vision of her.

To me, what stands out about Maggie Thatcher, who had about a twenty year career in the British Government in the UK Parliament, as Leader of the Opposition and then of course as Prime Minister, is all the important things in her career that they didn’t cover. They didn’t cover much of her as Leader of the Opposition and how she rose from that to be Prime Minister or. Her interactions with the UK Prime Minister. I believe they showed one Question Time performance, or her relationship with President Reagan, or, how she dealt with the Soviet Union. They covered a little bit of the Falkan Islands conflict with Argentina in 1982 and her attempts to cut the British debt and deficit. But about an hour of this movie was about her life post-Prime Ministership. Even though it’s as Prime Minister where she really made her impact, not only in Britain, but the world as well.

I thought that Meryl Streep did a very good job of playing Maggie Thatcher with the material that was given her. As far as what aspects of her life they covered. But no offense to Prime Minister Thatcher, this movie as far as appearances has a similar issue as the movie Game Change had with Sarah Palin. Except that I believe that Meryl Streep is too attractive, too cute and beautiful to play Maggie Thatcher. Whereas in Game Change, Julianne Moore is not attractive enough to play Sarah Palin, at least as far as I’m concern.