The Blazers probably peaked a season too early in 1990 and not prepared to play in the 1990 NBA Finals mentally as far as knowing what it took to win the NBA Finals. And they were playing a very veteran team in the Pistons who had just played in four straight conference finals and playing in their third straight NBA Finals and going for their second straight NBA Finals Championship. With the Blazers not even being to the conference finals with this group before reaching the 1990 NBA Finals.So this was a matchup of a very good experienced team in the Pistons, with a great player in Isiah Thomas and a great head coach in Chuck Daly. Vs. a young and very talented Blazers teams, without a lot of big game experience. And that showed up a lot in at least four out of the five NBA Finals games. 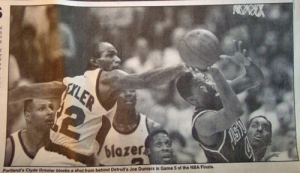