Last Week Tonight: Ayn Rand- ‘How Is This Still A Thing?’ 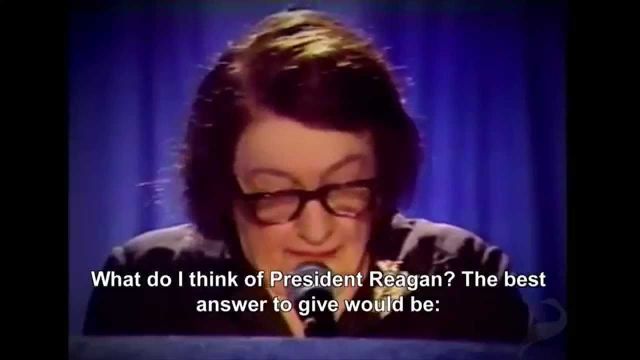 “Ayn Rand, author of “Atlas Shrugged” and “The Fountainhead,” is still kind of a thing. How?” 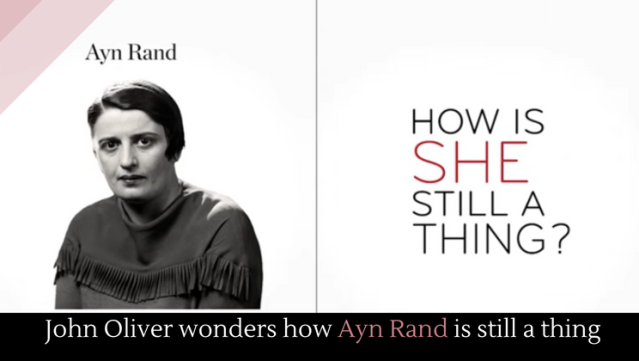 Source:All Top– “Author Max Barry once described reading Ayn Rand in this way,” I felt like Ayn Rand cornered me at a party, and three minutes in I found my first objection …”

I’m not an objectivist and not a believer in objectivism, but I am a believer in individualism and if that makes me a selfish asshole or douchebag, ( as the guy said in the video ) then that’s his damn problem, but not mind.

Ayn Rand, is not the mother of individualism or the creator of it, but perhaps is the strongest and most vocal advocate of it, which is why Liberals, ( such as myself ) Conservatives, Libertarians, even Socialists with her strong advocacy for feminism and the right to privacy can find something about Ayn that they can actually like, because most of us at least ( who aren’t Socialists or Christian-Nationalists ) believe in some degree of individualism and freedom of choice and don’t expect big government to even try to do everything for us.

Ayn Rand is sort of like ice cream or cookies: almost everyone can find something about her that they like. Almost everyone has a particular type of cookie or ice cream that they like and everyone has something about Ayn that they like: from 1960s Hippies to modern day Hipsters who don’t want to be part of the establishment and want to be able to live their lives. To Christian-Nationalists who perhaps want big government to live in our homes and tuck us in at night so we’re not living what they could call immoral lives, but like Ayn’s advocacy for economic freedom.

Even Socialists who believe in women’s reproductive rights and feminism, can find something that they like about Ayn Rand. To Liberals, Libertarians, and Conservative-Libertarians who believe in individual freedom and individualism and don’t want big government running our lives for us at all.

Almost everyone has something about Ayn Rand that they like or can like, just like most of us have a cookie or flavor of ice cream that we like as well. Because Ayn believed in personal choice, reason, objective thought, free will, free expression, American liberal values that most Americans still love. While collectivists on both the Far-Left and Far-Right can find a lot about her that they hate, because her whole message was about individualism and individual choice, instead of a government collective deciding what’s best for us.