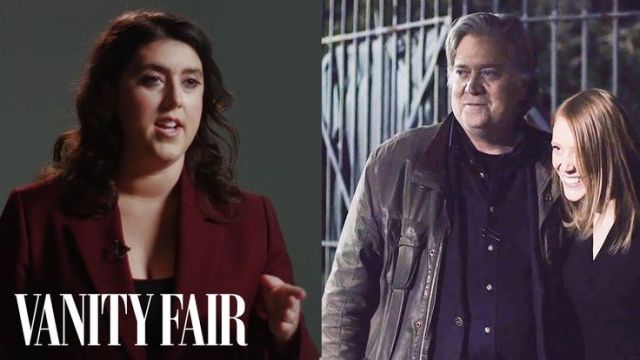 “Director Alison Klayman spent 13 months documenting former White House chief strategist Steve Bannon for her documentary The Brink. Alison explains the ways he manipulates his followers by spreading conspiracies and sowing doubt in the media. Watch The Brink, out in theaters March 29th.”

I think Steve Bannon might say himself that he’s not a Conservative, but a Nationalist. It’s not conservative values that Bannon represents at least in the sense that he believes in the U.S. Constitution and everything that it represents and even conservative values in a cultural sense, but it’s his nationalist, tribalist, and cultural values that he represents which trump’s everything ( no pun intended ) including character, morality and his personal values. Steve Bannon is about himself and his tribe versus everyone and everything else and as long as you’re on his team and part of his political and cultural tribe, everything else be dammed just as long as you play ball with him and his allies.

Alison Klayman, in her piece mentioned Judge Roy Moore who was an Alabama judge who ran for U.S. Senate from Alabama in 2017 in that special election and lost essentially because of his lack of character and his immorality and the credible sexual harassment allegations that were made against him. And said that Steve Bannon is not a stupid man ( as if anyone thinks that he is ) and she suggested that he probably believed the allegations that were made against Judge Moore, but stuck with Moore because Moore was part of his team and the broader Trump movement in America. Donald Trump’s presidential campaign from 2015-16 is another great example of that. President Trump’s base has stuck with the President even with everything that he’s done and said that no other Republican President and mainstream Republican in Congress would every consider doing and saying, because Donald Trump is part of their team.

When you become so partisan and even so hyper-partisan and angry in politics where the other party is not longer your opponents, but your enemies to the point that you don’t even see them as Americans, but traitors and invaders, everything is about winning and protecting your side. And you put no limits onto what you’ll do to win and protect your team, because you’re so fearful of the other team winning, coming in, and taking your power away from you. Which is what Steve Bannon and these other hyper-partisan hard-core Nationalists on the Far-Right in America represent. The great Green Bay Packers head coach Vince Lombardi had the great quote: “winning isn’t everything, but it’s the only thing” the New-Right have taken that line way out of context and put it over everything else in society like morality, character, and honesty.