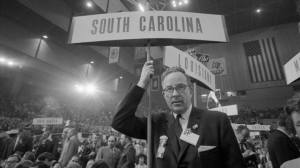 I’ve always seen the Republican Party as a conservative at least in the classical sense of a party that was made of classical Conservatives, or Conservative Libertarians, small l libertarians even like Barry Goldwater. Moderate more pragmatic Conservatives like Bob Dole and a progressive wing that is all, but gone in the GOP now with people like Nelson Rockefeller. And then add the Christian-Right that started coming over to the GOP in the late 1960s and has stayed ever since, as well as Neoconservatives who are beyond hawkish when it comes to foreign policy and national security and along with the Christian-Right they haven’t gotten the message that it’s no longer 1955 and America is sixty-years older now. The Robert Taft/Barry Goldwater wing of the Republican Party has always been there.

The Republican Party just now has a hyper-partisan Far-Right that doesn’t believe in governing and perhaps even government if it means working with Democrats especially a man that they hate in Barack Obama. As partisan as the 1990s was you still had Newt Gingrich and Trent Lott leading the House and Senate Republicans in Congress, who both had a very good working relationship with Democratic President Bill Clinton. And Senate Leader Lott’s case, he had a good working relationship and even personal relationship with then Senate Minority Leader Tom Daschle. That is all but gone now in the GOP, other than maybe Senate Leader Mitch McConnell who I believe wants to govern and get things done, just as long as his caucus will allow him to.

Other than the emergence of the Christian-Right and the Neoconservatives, I don’t believe the GOP has changed a lot ideologically. What has changed has been their approach to politics and how they work in Congress. Where people who would backbenchers thirty-years ago like Representative Steve King and Senator Ted Cruz, are now seen as leaders in the Republican Party with real influence. Senator Cruz’s influence seems to be dying now where Mitch McConnell no longer seems concern with him and what he might do. But you still have about sixty, or more Republicans in the House that can be the difference in whether or not bills get passed over there. Which is why Speaker John Boehner has gone over to Minority Leader Nancy Pelosi to pick up votes on bills that have to be passed. Like government funding bills and the debt ceiling.

I believe what has really changed about the Republican Party is that they’re a lot more partisan. And because of the New Right they’ve moved further right, where fighting big government is no longer alway their biggest issue. But using government to influence even through force how Americans live their own lives. That sees personal freedom and even individualism as dangerous things now. Once you move away from Christianity, the 2nd Amendment and political advertising. And these changes are bad enough when you have a divided country politically with divided government, but you still have issues that need to be worked on and agreements that have to be made between the Republican Leadership and Democratic Leadership for the government to get its work done and do the things that we need it to do.