I first came across Kirsten Powers who was once a columnist for The Daily Beast and political analyst for Fox News, ( one of like 3 Liberals at Fox News ) when I saw her book in 2014-15 about fascism arguing how the Left ( Far-Left, really ) is killing free speech in America. And she argues and I agree with her on this that free speech is a liberal value and I would argue that free speech are Liberals number one value, perhaps even higher than right to privacy and equal rights. She’s now a columnist for USA Today and I read her column in the late summer of 2015 when Donald Trump was just running for President at that point and she argued that Trump is an Evangelical scam artist. That is pretty close to the literal title of that column and I agree with her on that as well.

Kirsten Powers, is now a political analyst over at CNN and still a columnist for USA Today and she is a Liberal, but not in the sense that you may believe Liberals are supposed to be and this is what Liberals believe in. In other words, she’s not a Socialist in any sense and believes in things like free speech, privacy, personal choice, as well as personal responsibility, things that today’s so-called Liberals ( Socialists, really ) don’t believe in. And I like her for many reasons and one of them as you see in this video is that she’s very tough and expects to be able to make her points and arguments and doesn’t have much if any tolerance for rude interruptions, especially when two people try to speak over her. She’s also ver witty and she’s so adorable and yet grown up as well and is just very easy to listen to because she’s so sharp, witty, and adorable, as well as beautiful all at the same time. 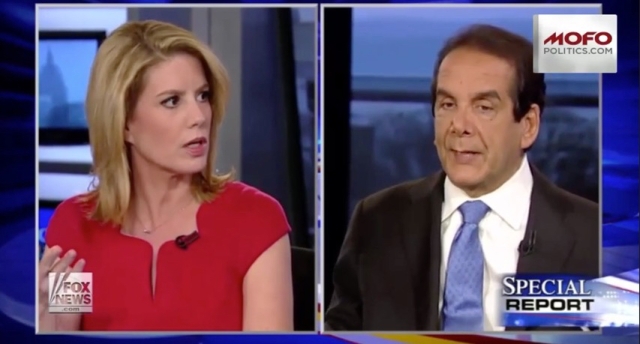 Kirsten Powers, even though it took her a while to get there, definition of Neoconservative is pretty good. “Someone who is very hawkish on foreign policy and national security and believes in using American military force to advance democracy around the world.” And yes, Neoconservatives gave us the 2003 Iraq War because they wanted democracy to come to Iraq. And as it turns out weapons of mass destruction, was really just an excuse for sending America to war in Iraq. The real Neoconservative objective here was to eliminate the Saddam Hussein Regime and replace it with an American friendly democratic government and state.

Kirsten Powers, also made another good point here when she says that Charles Krauthammer knows he’s a Neocon. Krauthammer is one of the fathers of the American modern neoconservative movement. Former Progressive Democrats who are very hawkish on foreign policy and national security. They’re still progressive on economic policy as far as what they believe that government should do as it relates to the economy and helping people in need help themselves and believe in things like the New Deal and Great Society, but that the safety net should just be there for people who truly need it and aren’t Social Democrats or Democratic Socialists ( people like Bernie Sanders ) who believe that public social insurance programs should be universal.

My simple definition of a Neoconservative is someone who is a right-wing Progressive. Someone who is not anti-government and believes in the safety net and a basic regulatory state and things like equal rights, but who isn’t a Social Democrat and puts real limits on what government should try to do for people and is very hawkish on national security, foreign policy, and law enforcement. What they were talking about in this segment, had to do with Neoconservatives as it related to national security and foreign affairs, but there’s a broader political philosophy to neoconservatism.