Notes on Liberty: Bruno Gonclaves Rosi- ‘Communism/Socialism is Rubbish- Both in Practice & In Theory’: Why Communism Fails

Source: Notes on Liberty: Bruno Gonclaves Rosi- Communism/Socialism is Rubbish- Both on Practice & In Theory

Before someone argues that of course socialism works, just look at Britain, France, Scandinavia, and perhaps Europe in general, this is not about socialism at least in the democratic sense. This is about communism, which is different and is the authoritarian wing of socialism. Every social democratic or democratic socialist country in the world, has a capitalist economic system. Their capitalist system is just different than America’s and even Canada’s and even Germany’s. And socialism along with communism, aren’t just economic theories and systems, but political ideologies and governmental systems as well. So Europe with their social democratic/democratic socialist economies as well as forms of government, of course look different from America, which is a liberal democratic federal government, with governmental power is spread out and where individualism is rampant and encouraged. 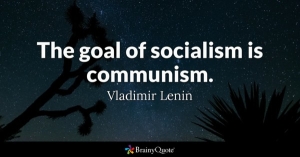 People on the Far-Left everywhere and not just in America, argue that we don’t know if communism and socialism have failed or not, because they’re never in accurately put into practice. But we know that is simply not true. We know that social democracy/democratic socialism, have been put into practice and we know the results from that economic system and form of government. And we know that communism has been put into practice and the results of that economic system and form of government. How we know this? Because the people who advocate for communism are actually talking about Europe and other social democratic countries around the world like Japan, Australia, Canada. That wealth should be highly taxed and spread out. That no one should have to go without the basic necessities of life regardless of their education and production levels. That you should have a big centralized welfare state to provide people with the insurances that they need to live well. That is the economic system of Western Europe, Canada, and Australia, Japan as well.

What Communists do is make the same arguments that Democratic Socialists do, but take it further on both economics and expand their ideology to how government should operate and the role of state and and people in society. That the state should be put in charge of the people to serve the people on their behalf and meet everyone’s needs for them. That people sacrifice choice and freedom, for economic and physical security. And as long as everyone cooperates and doesn’t oppose the state, they would live in prosperity. That is always the promise of communism and the contract that Communists propose when they run for office. Whether they officially label themselves as Communists like in Cuba, or are dishonest with their ideologically and govern as closeted Communists, like what we see in Venezuela. Where the party in power there is actually called the Socialist Party, but they effectively at least govern as Cuban Communists. With a little more media, opposition, and freedom for the people.

Why Communism fails is because people, human beings in general tend to want freedom and be able to make their own decisions and self-determination. Wherever they live in the world, at least when they’re being honest. And that includes the social democratic/democratic socialist countries of Europe ( with the key word being democratic ) and when you take that freedom away and you take competition away, you also take away individualism and creativity, the incentive for people to improve and be productive, because they’ve been promised that whatever happens with them and however they perform in life at whatever they do, that big government no matter what will always be there to take care of them.

People all over the world tend to operate from fear. That if they don’t succeed and do well in life, bad things will happen to them that government won’t be able to bail them out and make it all better again for them. Which tends to be all the incentive that most people need to succeed and be productive in life. Because people tend not to want to live on Welfare and be able to do well in life so they don’t need Welfare to support themselves. In a communist system and I would argue at least even in a democratic socialist system, that fear is taken away. Because social welfare benefits from those countries at least in those developed countries, are so generous, that people know if they fail, they’ll always have big government there to bail them out. With our more liberal capitalist economic system, we don’t have that generous taxpayer funded insurance system to ball us out when we fall on hard times or even fail. Which gives us all the incentive in the world to succeed in life.

Seriously, if you don’t believe communism is a failure both as an economic and governmental system, spend some time in Cuba or North Korea. People don’t flea from countries that are doing well and are prosperous. And take long dangerous boat rides from Cuba to Florida, to escape the authoritarianism of Cuba and try to live in freedom of America. Americans don’t escape America to go live in Cuba or China, because they can’t handle personal decision-making anymore and want to go live on Welfare in Cuba, the Communist Republic of Korea, ( which is actually North Korea really is ) or China. During the height of the Cold War, about half of the world live under one authoritarian government or another, including Europe. Now most of the world especially in the West, no longer lives under communism or another form of authoritarianism.