The Wawg Blog: Andy Hailey- ‘How We Got Into The DJT Political Swamp: It Has Little To Do With Russia’

Source: Wall Stats– Yep, that pretty much sums it up

Source: The Wawg Blog: Andy Hailey- ‘How We Got Into The DJT Political Swamp: It Has Little To Do With Russia’ 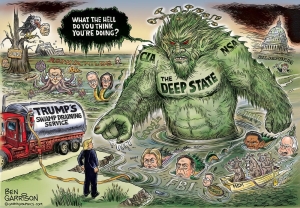 I have a different take. Economics Professor Classical Liberal Milton Friedman, who I didn’t agree with on everything mostly having to do with regulations of the economy where I tend to be in favor of them, if they’re commonsense and not intended to run private businesses, argued that the problem with money in Washington, has to do with power and money in Washington meaning the Federal Government. That the reasons why lobbyists lobby so much in Washington is the same reasons why bank robbers rob banks, because that’s where the money is. Since 1964 the Federal Government has only gotten bigger, with few exceptions in the 1990s. And since that time even if you want to go up to 1970 from 1964, we’ve also only seem more lobbyists in Washington.

My other take on this has to do with American voters themselves. One good definition of insanity is doing the same thing over and over again expecting different results. You continue to vote for the same people to serve in Congress and vote for members that are corrupt or if you prefer bought and expect their behavior to change, you’re acting insane. U.S. Representatives and Senators, are not lifetime appointments. They go up for reelection every 2 and 6 years which gives their constituents the opportunity every 2 or 6 years to evaluate them and decide if they’re doing a good job or not. Are they of strong character and have strong qualifications to serve in the House or Senate, or are they lazy, vote against their constituents interests, and are corrupt or bought by the people who write them checks and finance their political campaigns.

So if you want to better politicians in America, you have to have better voters. And voters who stop voting for politicians because they like the smartphone the person uses, or because the politician is up to date on pop culture references, catch phrases, and entertainment in general, but who can be bought for a 100 bucks to vote this way or that way. And instead vote for candidates and incumbents who will do the job that they’re elected to which is to represent their constituents especially the people who can’t afford too write big checks to political campaigns.

And to go back to the Milton Friedman argument. You want fewer lobbyists in Washington, a good way to do that is to get money out of the Federal Government and decentralize a lot if not all the social insurance programs and allow for the states and localities to run them, under basic Federal standards to make sure those programs for the people who truly need them are run the way they’re supposed to be. Stopping running budget deficits in the hundreds of billions of dollars every year. And get the the country’s fiscal house in order.

A couple of things that Congress can do and the U.S. Supreme Court might do one of these things for Congress, since Congress probably won’t has to do with gerrymandering and full disclosure. Eliminate gerrymandering all together and you’ll make Congress at least in the House accountable. Because representatives will no longer be able to just run to a hyper-partisan faction in their district and instead will have to represent a district that is more balance politically and ideologically.

And the second one being which unfortunately qualifies for the good luck with that column, because it goes against current members of Congress own political interests , would be full disclosure off all political contributions in America, at least at the Federal level and force members and candidates, as well political action groups and lobbyists, to disclose how they’re funding their political campaigns. And let the voters decide if their politicians and candidates, are bought or not.

A lot of the so-called Washington swamp and lobbyists issue in Washington, goes to personal responsibility. Back to my definition of insanity about doing the same thing over and over again and expecting different results, you keep voting for the same politicians and you’ll just get the same behavior and same policies. Which will probably be written by the lobbyists who make the biggest political contributions. But you vote for good qualified people instead and help them get elected and get them elected and you’ll get different policies that are designed to represent their constituents instead. And Congress if they decided to go against their current political interests, could be helpful here as well by eliminating all gerrymandering and passing full disclosure off all political contributions. But fixing Washington and Congress starts with the voters themselves.

1 Response to The Wawg Blog: Andy Hailey- ‘How We Got Into The DJT Political Swamp: It Has Little To Do With Russia’