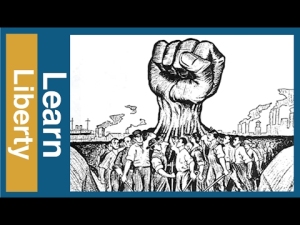 Source:Learn Liberty– A look at Marxism

“Marx was the greatest social scientist of the 19th century…” says Professor Deirdre McCloskey. “But he got everything wrong.”

As I explained with communism last week and explaining what communism is, the basic definition of communism is that communism is the state owning the means of production in society. Someone who is a hard core Communist believes the state should own and manage the entire economy and that property rights and property ownership, are outlawed. In a true communist state people wouldn’t even own their own homes or automobiles. No such thing as small businesses with people owning their own restaurants. All private property including businesses and personal property, would be owned by the national government. This is basically the basic definition of what is called Marxist/Communism.

When I think of Marxist/Communists today and going back to pre-Cold War is that people who do believe the state should own the means of production in society, but that there political philosophy goes beyond just economic policy. A Communist to me anyway and even so-called Democratic Socialists who perhaps aren’t pure Communists and do have some democratic leanings with those leavings being more social democratic and collectivist, than liberal democratic and don’t put much if any emphasis when it comes to individual rights and aren’t fans of individualism at all, are people who see individualism and personal autonomy as dangerous and selfish. And therefor you need a big centralized national state to make most if not all the decisions for society. And to prevent people from being greedy and to think for themselves. As well as to develop opposition to the state.

My personal definition of a Communist or Marxist/Communist if you prefer, even though I don’t believe we’ll ever know what Karl Marx thought beyond economic policy, is someone who is anti-individual and pro-collectivist. Someone who is against individualism and pro-statism and collectivism. Sees personal autonomy and individualism as dangerous and believes once you give people the freedom to make their own decisions, they’ll end up making bad decisions that the state will end up having to pay for. Or will make great decisions for themselves and end up doing much better than society as a whole which is what Communists view as selfish.

This definition of communism can be applied to more than just economic policy and property rights, but big government in general when it comes to the nanny state as well. But the political correctness movement on the Far-Left and Far-Right, that seeks to eliminate and censor free speech that they disagree with and find offensive. If you’re asking me that would be my definition of a Communist. A and to a large extent Socialists in general. Even though Democratic Socialists to tend to be more democratic obviously and a believer in at least some individualism when it comes to private property and the right to privacy, and some personal autonomy.