Posted on November 5, 2014 by Kire Schneider 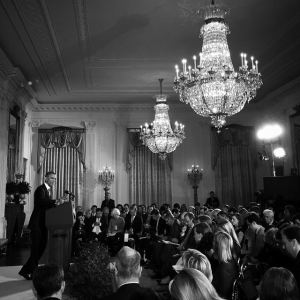 I believe President Obama did what he needed to do in this conference. Which was to graduate incoming Senate Leader Mitch McConnell and Senate Republicans for winning back the Senate for the first time since 2004. And House Speaker John Boehner and House Republicans for adding to their majority. As well to layout where he will be willing and believes he can work with Congressional Republicans in the next Congress that will have a Republican House and a Republican Senate.

I’m not one of these doom and gloom utopian the perfect and compromise is the enemy of the good Democrats. I live in the real world and know that President will have to work with Congressional Republicans as well as Congressional Democrats especially in the Senate if he wants to get anything that is substantial done in the next Congress. So I’m not expecting the President to cave on any of his or the Democratic Party’s key agenda items in the next Congress. He said he won’t do anything that weakens the Affordable Care Act and I believe him.

But here’s where I believe they can work together. The Keystone Pipeline will be one of the first big items that House Republicans will pass in the next Congress. Perhaps within the first month and that will pass with a bipartisan majority. And will be sent to the Republican Senate where it will have bipartisan support and I don’t expect Senate Democrats doing much to try to block the bill. As long as they are involved in it and are allowed votes on their amendments.

As far as infrastructure and other energy policies and issues like immigration and tax reform. If anything is done on those issues, it will have to come from Congress first and probably starting in the Senate. Where traditionally it is much easier to get bipartisan bills passed over there than the House. Trade agreements I believe will be big in the next Congress and where President Obama will have bipartisan support in both the House and Senate.