Posted on September 1, 2016 by Rik Schneider 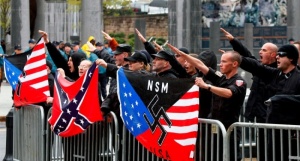 Source: The New Democrat Plus

What is the Alt-Right in America and what the hell is it doing linked with the Republican presidential nominee Donald Trump? The Republican Party that is supposed to be the Center-Right party in America and the party of Lincoln. The party of Abraham Lincoln the man who freed the African slaves in America, instead of calling for them to be deported back to Africa or even murdered. Which is what segments of the Alt-Right in America like the KKK have called for. That is the subject of this piece and since this movement is linked to the GOP nominee for president Donald Trump, it’s time to talk about this.

The Al-Right, is a collection of European-American, primarily Anglo-Saxon and to a certain extent German-American nationalist groups. Almost exclusively believe that America belongs to Protestants who come from Britain and Northern Europe originally, west of Scandinavia. They aren’t just anti-African or anti-Latino or anti-Middle Eastern or anti-Asian. They’re anti-Jewish, they’re anti-Slav, they’re anti-Mediterranean and even anti-Catholic. Regardless of the person’s ethnicity or race. And they’re predominantly men and see women as their pets. The Democratic Party, has the Far-Left, or New-Left (if you want to be nice) but the Republican Party has their own fringe movement as well. The Far-Right which again are Northern-European Protestant-American Nationalists. Who see America as only belonging to them. And everyone else as Un-American who don’t have a right to exist in the United States.

So why would the Republican presidential nominee want to have anything to do with people like this? Why would Steve Bannon who runs an Alt-Right publication like Breitbart, be associated with his campaign. Why does Donald Trump, say things and take policy positions that get endorsed by Alt-Rightists like Ann Coulter and even David Duke? I’ve argued before that Donald Trump doesn’t even want to be President of the United States, or doesn’t have much of an idea how to become president. Which would explain why he would take this route to the presidency since the Alt-Right represents a small and even shrinking population in America. But the Trump Campaign, whatever you think of it, does represent forgotten Americans in this country. Who are predominantly Caucasian, Protestant, Catholic and male. People who believe America is going downhill since the 1960s when multiculturalism became mainstream and America started to become the giant melting pot that we are today.

Not saying that all Trump supporters are Alt-Rightists, but those people are not just part of his base, but now part of his campaign. Which is why The Donald is now losing Republican men and women, who are conservative even, but aren’t racists. And true Conservatives aren’t racist or bigoted anyway. The Trump Campaign represents the America of the 1950s and Donald Trump is selling a recipe and saying that he can return this America to his supporters. Where English-Americans and Protestants and men from these groups, essentially ran America, with everyone else essentially serving as the servants of these people. Even if Donald Trump is not a racist and bigot himself, he’s guilty of trying to sell Americans a vision that he can’t create and produce. And asking his supporters to pay up front whether The Donald has any real plan and ability to deliver what he’s selling. Donald Trump, is not a politician, but a liar and demagogue, which is even worst. And his voters are buying spoiled meat upfront as a result.

Millennial Woes: We Are The Alt-Right