Teddy Roosevelt: Make The Best of Things in Life 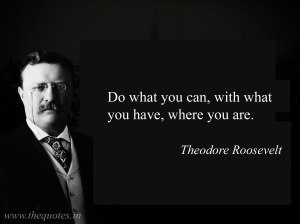 I’m not a big fan at least of the Tremors genre, series of Tremors movies from the 1990s with people like Kevin Bacon, Michael Gross, Fred Ward, and others. But the Tremors Aftershocks movie from 1996 is a very funny movie. Mostly because of Mike Gross, Fred Ward, Chris Gartlin who plays Fred Ward’s partner.

And Mike Gross has this line in the movie where he’s just nailed a bunch of these creatures that were trying to catch these people in the capital of nowhere in Mexico, with one of his big weapons and he destroys several of them with his big rocket launcher or whatever it was. And his partners come up and congratulate him on that and are very excited. With the Gross character simply just saying, “doing what I can, with what I got.” Now, I don’t know if this guy is a big fan of Teddy Roosevelt or not, but that is what TR is saying with this quote.

I believe there are three kinds of people in life and these three character types have other aspects about them as well, but we all fit into one of these three categories.

The doer, the bum, and the bitch. And I don’t mean bitch in the sense of female dog, but someone who is always complaining and seems to be happier when they have something to complain about instead of something positive that is positive about them.

The bum, is always stuck in neutral, perhaps too afraid to take any risks and as a result doesn’t move forward or backwards, because they never take any risks and make any investments with their time, energy, and other resources that they may have. The bum is sort of the opposite of a Progressive like TR, or a Regressive. The bum doesn’t progress or even conserves, they just stay where they are. At least Conservatives like Barry Goldwater and Robert Taft, conserve and protect what they cherish and value. The bum doesn’t even do that, because they believe if they try to protect and conserve what they have, that will require effort and risk and might lose everything as a result.

The bitch is always in a bad mood. On a July Fourth parade, they’ll spot the only cloud in the sky on a hot 90-95 degree day and that cloud will turn into a hurricane of rain. Their team wins the Super Bowl and they’ll complain about the six penalties and two turnovers that their team committed and just focus on that. And actually get no satisfaction from actually winning the Super Bowl. Imagine having a bitch as a Boston Red Sox fan in 2004 when they Red Sox won their first World Series since 1918. Instead of focusing on the fact that the Red Sox just won their first World Series since 1918, when Teddy Roosevelt still had some political power, the bitch wonders why the Red Sox were down 3-0 to the New York Yankees in the ALCS and just focuses on that instead. How would you like to have a bitch as your campaign manager on Election Night and you’r supposed to be ahead by 10 points in the polls.

Life is exactly that and when you over promise or think things are better than they are, you only set yourself up for big disappointments. Because you stop doing your homework and the work that you did that got you to the point where you are. And on the other side if you always believe things are worst than they are, they always will be at least to you. And you won’t do the work and put in the effort to make things as good as possible for yourself and the people you care about, because you’ll believe what’s the point. Life sucks in your ant size mind. And the person stuck in neural will only go as far in life as car stuck in neutral or that is out of gas. Because they won’t make any real investments and take risks. That old saying you only get out of life what you put into it.

But the doer is a realist and always has the best available information around them and knows what to do with it which is why they’re successful. The doer knows how much money they have and exactly what they can get out of that money, because they know what they need and who much everything costs and spends their money based on those factors. But also knows how to advance their wealth both financially and personally, because again they always have the best available information and made themselves into the best person that they can be. They’re doers, they’re Progressives, they progress and move forward in life.

Life is not fair or unfair, generally and even if people have screwed you, you always have the opportunity and ability to recover from that and even move forward. But only if you progress and make the best out of your situation in life and the best out of yourself. Instead of waiting for positive things to happen to you, or not having the balls frankly to take any risks in life. Life is about risk versus reward and calculating those things together to see where you can go. Not sitting around and waiting for things to happen. Or living in a cloud because you think life is too tough. 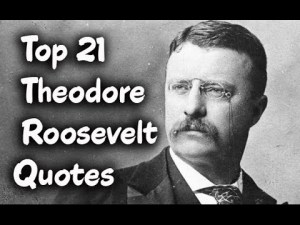