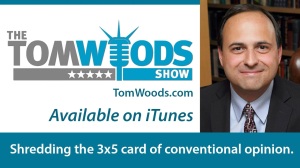 “Christopher Snowdon of London’s Institute of Economic Affairs makes the case against paternalistic meddling in individual decisions. Subscribe to the Tom Woods Show:”

There isn’t really one form of a nanny state or one ideology that backs a nanny state. The nanny state comes from both the Left (and not Center-Left) and the Right. (And not Center-Right) People on the Far-Left who at the very least have communist leanings and see individualism and personal autonomy as dangerous and people who don’t share their politics as stupid. And view people in general who at least don’t share their cultural values and politics, as stupid. And people on the Far-Right who see certain forms of personal behavior as immoral and offensive to their religious and cultural values to the point that they believe those certain activities should be outlawed. And are also people who believe individualism and personal autonomy at least as it relates to personal behavior are dangerous.

I don’t believe any intelligent American on the Left or Right is going to argue that there not only stupid people in America, but a lot of stupid people. People who make such bad decisions that it does affect the lives of others. Drunk driving, would be an example, obesity that drives up the health care costs of other Americans especially because of emergency care that people who eat and drink poorly and don’t exercise, end up consuming a lot of emergency care because they can’t afford to financially pay for the costs of their consequences from their own bad behavior. And therefor end up passing those expensive health care costs onto healthy Americans.

The question should always be what should be done about it. Do you really want to penalize and even make criminals out of people who only hurt themselves at least in the short-term. Or do you want to hold them personally and financially accountable for their own poor decision-making and not allow for them to pass their health care costs onto healthier intelligent Americans. And I’m not talking about denying people health care simply because they made bad decisions with their own diets. But instead having them pay for those costs either upfront through taxation, or through higher health insurance premiums.

The nanny state coming from the Christian-Right primarily in America, is not about stupid personal behavior at all. But really about certain activities that Christian-Conservatives find immoral and offensive to their religious and cultural values. Whether its gambling, pornography, adultery, adult language, adult music, adult movies, homosexuality, women working out of the home, etc. And unfortunately there are many more examples, but I’ve given you several. But activities that the Christian-Right would outlaw in America and would put people in jail for doing them if they were ever to come to power, simply because these activities offend their religious and cultural values.

Again, its not a question of whether there are stupid people in America and a lot of Americans who do things that are simply not in their personal interest. As well as activities that don’t even come with much of a level of danger, but for whatever reasons aren’t for everybody which is why not everybody does those things. The questions are who gets to make the decisions when it comes to their own personal lives and who has to deal with the consequences of their own personal decisions. And as a Liberal because I believe in liberty I come down on the side of the individual. As someone who believes in personal freedom and personal responsibility. Not someone who not only believes in big government, but government big enough to protect people from themselves.