Posted on January 9, 2018 by Derik Schneider

Plus, you have the Baby Boom Generation starting to come of age in the early and mid 1960s who weren’t anti-Communists at least when they were young and didn’t see communism as some threat to their way of life. Who were anti-war pacifists at least when it came to the American military, who hated America’s involvement in the Vietnam War and wanted to create a new America by any means necessary. That was less individualist, less capitalist, and less military.

The New-Left emerges as this movement that was a socialist movement made of both Democratic Socialists and even Communists. Groups like Students For a Democratic Society, The Weather Underground, and other New-Left socialist groups in America. This is the movement that broke the Democratic Party in half in 1968 and a reason why Hubert Humphrey loss the presidential election to Richard Nixon in 1968 and backed George McGovern for President in 1972.

If you look at George McGovern 1972 presidential campaign, he was the Bernie Sanders Democratic Socialist of his era. Someone who believed America was too decentralized when it came to its form of government. Who wanted to create a Scandinavian welfare state for America with the Federal Government being responsible for lot of the basic human services that we consume in life. Who was anti-wealth and believed that Americans were generally undertaxed. But McGovern pre-1968 or so was lot more mainstream with his politics. A World War II veteran who served honorably as a fighter pilot. Born and raised in North Dakota, who was very religious. George McGovern was never a New York City or San Francisco radical Socialist, who was anti-American and saw America as the real evil empire in the world. Even in 1972 he didn’t believe that.

But on economic policy George McGovern was the Bernie Sanders of his era and Bernie Sanders was the George McGovern of his era. Not people who believed American capitalism was evil and should be destroyed and replaced with some type of Marxist economic system. But was someone who believed that American capitalism should be used to finance a very generous welfare state and go together as part of a new American economic system. A large private sector and private enterprise system, to go along with a generous welfare state financed through high taxes on everyone. On economic policy at least George and Bernie, were always way to the left of most Americans on economic policy, even if they would be considered mainstream Center-Left Social Democrats in Europe. 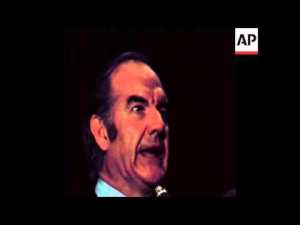