Reason: Hit & Run- Matt Welch- Republicans: ‘We Have To Cut Taxes Because We’re Too Cowardly To Cut Spending’ 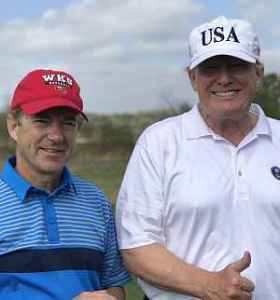 Call me silly, but when I think of fiscal Conservatives I think of people who believe the national debt and budget deficits, not only exist (unlike at least some Socialists) but its a big deal. (Unlike most Socialists) That when government borrows heavily and run up high deficits and debt especially when their economy is growing and job growth is high, which is what the American economy is doing right now, that running high deficits and debt is not a good thing.

Because you end up having your government, as well as your economy depending on others to make sure your government gets the borrowing that it needs run its operations. Plus, when you run high deficits and debt, which is where America is now while your economy is strong which is where are now as far as growing economy with low unemployment and high job growth, your government ends up competing with the private sector for borrowing. Which affects interest rates and makes it more difficult for private organizations to borrow money. Which is where we are now which isn’t much different from the 1980s that had strong economic and job growth for most of the decade, while the U.S. Government was piling up deficits and debt every year. Which affected the stock market with the 1987 crash and was partially responsible for the recession of the early 1990s.

So to me anyway a fiscal Conservative is someone who is not only concern about high deficits and debt, but is crazy enough to believe that those issues need to be dealt with so at the very least they don’t get out of hand. If there is anything positive about having a Republican united government (and most of the country is still looking for anything positive about that) it would be at least now there’s a political party in power and in control that will finally deal with our deficits and debt. And works to pass policies out of Congress that brings our deficit down and perhaps even puts the budget on a path where it could be balanced at some point. Where at the very least the national debt is now growing faster than the economy.

Again, if there’s anything positive about having the Republican Party in charge of anything, it would be at least you would have fiscal Conservatives in charge who’ll bring down our debt and deficits. get our spending under control, decentralize the Federal Government, get more power out of Washington. But thats not where the Republican Party is right now. They seem to believe that fiscal conservatism is about obtaining power, not about governing. But as a tool to use to get into power, but once you’re there then it becomes about staying in power.

And I’m not picking on Socialists anymore than they deserve to at least, but tax cuts in America are popular to anyone who is not a Socialist. Perhaps more popular to Republicans and the Republican Leadership in Congress and at the White House, has concluded that the best way for them to stay in power is to pass popular bills that will help them get reelected and keep their majorities next year. And then let their children and grandchildren figure out the costs of their parents and grandparents borrow and spending. National debt card spending spree that covers everything from defense spending and generous tax loopholes, to Federal spending covering public education and medical research. As well as the Federal safety net.

I really could call this piece The Death of Fiscal Conservatism, because that is what we’re seeing in the Republican Party. Even with House Republican who in 2014 were railing against the so-called Obama deficits and national debt and overspending and arguing about how big a threat to our children’s future and other nonsense that they’ve seem to forgotten. Apparently power does corrupt and its a lot easier to be loudmouth when you’re on the sidelines than actually in the game with the ball. Apparently Republicans now believe that you don’t have be in the game to govern, but don’t even have to have any balls to take on high deficits, the national debt and that governing to them is just about staying in power. And again leaving it to others to figure out how much their governing which is really borrowing, is going to cost others later on.

The great political humorist P.J. who is a Libertarian and I don’t think you could pay him to be a Democrat today and even if you could it might bankrupt the Democratic Party and perhaps major economies to get P.J. to even consider doing the Democratic Party, gave a speech at the National press Club several years ago talking about so-called Conservatives and fiscal responsibility. I wrote a piece for FRS Real Life Journal where I write lifestyle and entertainment, as well as humorous pieces and put the link of his speech on that blog. And you can see that here. FRS Real Life Journal

I argued back in 2014 that Republicans when they only controlled the House of Representatives while Barack Obama was will President and Democrats still controlled the Senate, that so-called fiscal responsibility and fiscal conservatism, were just tools to blame the Democrats for the financial and economic problems of the country. Republicans and the Tea Party, only saw fiscal conservatism as a way to get back into power, but never as a tool to actually use to govern and finally bring down our deficits and debt. And with President Donald Trump and the Republican Congress, I’m being proven right everyday.