The Nation: Opinion: John Nichols- President Obama Is Right- This Unauthorized War Needs to Be Debated by Congress

Posted on December 9, 2015 by Derik Schneider 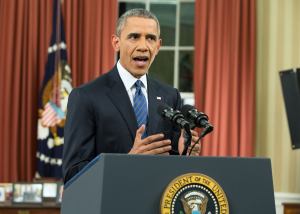 Source: This piece was originally posted at The New Democrat: The Nation: Opinion: John Nichols- President Obama Is Right- This Unauthorized War Needs to Be Debated by Congress

I believe the only impressive point that President Obama made in his ISIS speech on Sunday night, was saying that Congress should be debating this war and passing an authorization for it. If the House and Senate held a vote tomorrow on whether or not America should be involved in the war against ISIS in Syria and Iraq, it would pass overwhelmingly in both chambers. With perhaps just the Progressive Caucus and few Libertarians in the House voting no and perhaps a handful of Senators voting against it as well. If that was the only question and then of course it would have to be worded right where you get clear majorities in Congress behind it.

The original Congressional authorization for the so-called War on Terror was in 2001 for Afghanistan in response to the 9-11 attacks and then they updated it to cover Iraq in 2003. Syria was never part of it, neither were outside terrorist organizations like ISIS. Congress, has to get off their asses frankly and start at least trying to earn their one-hundred and fifty-thousand-dollar a year salaries. Which might not be that much in Washington, but compared with the rest of the country they’re well-compensated, especially if you look at their compensation packages compared with the rest of the country. And the Senate and House need to start trying to earn those benefits.

Congress, is supposed to authorize and say no to wars. The President, can’t do this on their own. They need approval from Congress to go to war and need Congress to authorize the costs of the wars. And I understand with a Republican Congress not wanting to go on the record of even supporting the same weather reports and sports teams as President Obama, because of how their Tea Party would react. But public office is about governing. You run for office to get there and can play all the politics you want on the campaign, but once you’re in office you have a responsibility to govern. Even if that means working with a President from the other party and officially supporting a war that might not be popular.